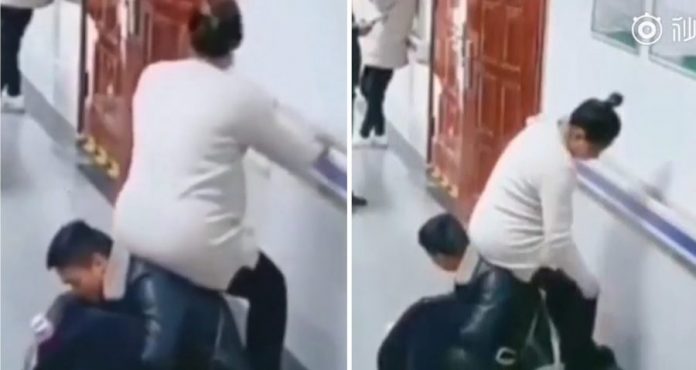 In an era where chivalry is said to have become obsolete, one loving husband from China is taking the seat for doing something admirable for his pregnant wife.

In a video footage of a surveillance camera taken in a hospital, a man is seen crouching on the floor while his very pregnant wife proceeds to sit on him while waiting for her turn.

It appears that the hospital is filled with people and all the benches nearby were occupied. The queue the woman was waiting in was making her restless and she started squirming uncomfortably, probably tired and aching from the prolonged standing.

Without thinking twice, the husband lowered his body down on the floor and let his wife sit on him when she gestured towards him. She then settled on him, while pounding on her thighs repeatedly shortly after and holding her back a few times.

The scene has taken the online population in a whirlwind of storm with conflicting opinions. While some agree that her husband did the right thing acting quick in time, others criticized the lack of compassion the people around the hospital showed.

They commented how the others could have easily given up their seat for the pregnant woman, though a few defended that they are not obliged to do so because chances are they are unwell themselves, since the whole situation took place in a hospital.

Some netizens even took to the husband, saying that he should have let her sit on the empty bench that can be spotted a short distance away from waiting room while he stands in the line.

However divided people are about the incident, it’s undeniable that the husband’s action clearly shows his love for his wife. He was willing to put his comfort aside to provide the best solution at the moment for his wife, regardless of how temporary it was.