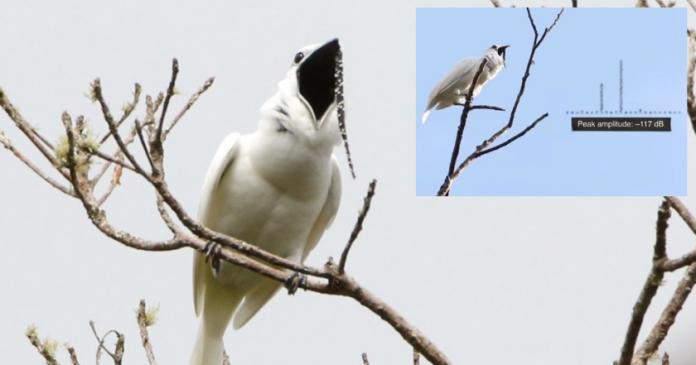 During mating season, animals use unique and peculiar mating calls to attract the attention of potential mates. Sperm whales which are famous for being the loudest animal on Earth also use mating calls as seduction tactic but even they cannot compete with the loudest bird in the world, the White Bellbird.

Dubbed as the world’s loudest bird, White Bellbird certainly do not have to worry about getting the message delivered to potential mates.

Just how loud their mating calls are?

According to biologist Dr. Jeff Podos of the University of Massachusetts and lead author of a study on White Bellbirds’ mating songs, the birds’ mating calls are so deafening that it reaches the decibel levels equivalent to a hammering of a pile driver, around 125 decibels.

White Bellbirds have two songs, as reported in the study.

Meanwhile, the second song which the male birds produce when there are female birds around can reach up to 125 decibels.

This is also equivalent to standing beside or near a siren which has a decibel of 120.

According to Dr. Podos and his team, it is actually hard to gauge the exact decibels of the bird’s mating songs from different distances.

“I am surprised that the loudest bird makes loud sounds when the female is so close,” said Nicole Creanza, an assistant professor at Vanderbilt University told the New York Times.

In a now-viral video of a White Bellbird singing a mating song, the bird can be heard singing a high-pitched melodious pattern that reaches up to 125 decibel, louder than most pile drivers can produce

While other birds will usually tone down their mating calls when a female shows their interest, it does not apply to White Bellbirds. The male birds sing louder when female birds get closer to them.

Listen for yourself on how loud White Bellbirds sing here

The internet went wild for this cat who loves to take...