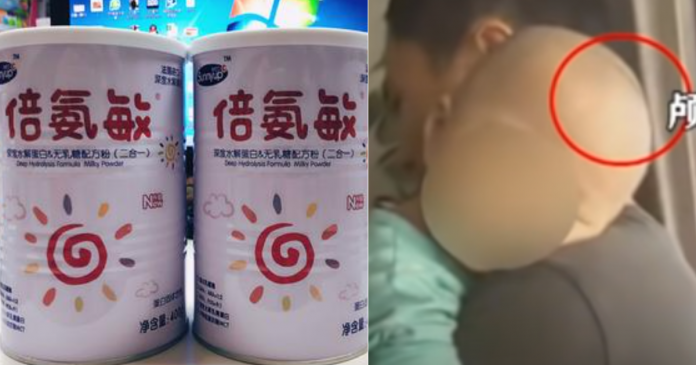 Recently, more children in Hunan Province, China might have been developing ‘big-head’ disease after consuming some kind of ‘special medical milk powder’. The milk powder is usually intended for babies who are allergic to milk protein and costs double or triple the price of baby formula.

Five children in Chenzhou currently suffered from severe weight loss, skull deformities resembling ‘big head’ and a number of other diseases after consuming the protein powder called Beianmin on their doctors’ advice. Due to this, their parents urged the local authorities to investigate the case.

The fake milk was promoted as special medical milk powder for babies allergic to milk protein.

Babies were said to develop big head after consuming the fake milk.

Liu, a father of an 18-month-old child said that his son began drinking the fake milk since he was eight-month-old, when he was diagnosed with an allergy to milk.

“From May to December 2019, we had to take our boy to the hospital basically every month after he consumed the milk,” said Liu.

“As the milk was recommended by doctors, we did not suspect there’s something wrong with the product until we see a media reported on it.”

Liu and 80 other parents have a WeChat group, where they share their experiences and discuss the case. Some of the parents are worried the product might have a long-term impact on their childrens’ health even though they currently did not display obvious symptoms.

According to some parents, this fake ‘medical milk powder’ was sold at local stores and some was even sold at pharmacies affiliated with local hospitals.

Parents urged that these stores to be held accountable as the salespeople misled customers into buying this fake powder as a milk substitute. However, the store owners refused, saying it was the manufacturers that promoted the product as a nutritional supplement for children with allergies, not them.

As the recent news being disclosed, a similar case reported in 2019 comes to light, involving another brand named Shuertai. The Chenzhou market regulation administration and health commission said that in the 2019 case, the incident was identified as one of false promotion, and the doctors involved were suspended from their positions for one year.

The manufacturers of the milk powder and the hospital were also asked to compensate the victims. However, some parents who reported the problem to the local market regulators in 2019 said that they didn’t even receive compensation yet.

Hunan authorities said that they are sending a special team to thoroughly investigate the case.

Fishermen cut open the bellies of dead pregnant sharks. What they...