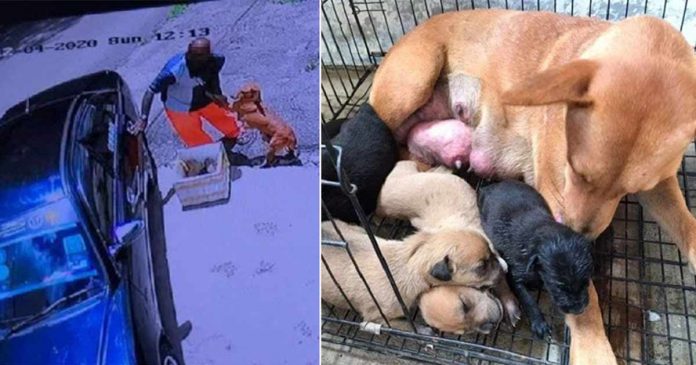 A heartbreaking footage has been circulating on social media recently. In the video, a mother dog is seen pleading a man to not leave her and her puppies behind.

In a clip posted by Kluang Johor Stray Dog Home, a man is seen driving his car into the compound of a a rescue shelter.

He then proceeds to get down, bringing out of the car with him an adult dog. He also takes out a box which had 5 newborn puppies inside. The puppies still had their eyes closed.

Having put them at the front door of the residence, the man gets ready to leave when the mother dog jumps on his legs and stops him midway. He tried to shake her off but she placed her front legs firmly on his, making it difficult for him to move.

It was as though she was begging him to not abandon her and her children there alone. Unfortunately, her plea didn’t work. The man eventually drove away.

When the shelter discovered the abandoned animals, they brought them to vet for further inspection. Initial diagnosis revealed that the mother dog has breast cancer.

A few follow ups concluded that the growth found on her nipples were not cancer but pyometra, an equally dangerous womb infection.

The mother dog would have to undergo operation to remove the tumor once the puppies stop breastfeeding. They would also need to be sterilized to ensure they do not contact their mother’s infection.

Concerned as they were, the shelter were also in the midst of a financial crisis. Since the lockdown, they have been facing difficulties feeding over 1000 animals residing under their care.

Donations have plummeted greatly, causing them to constantly look for other alternatives to feed the animals. The man’s irresponsibility not only added to their burden, but also their rage.

Accepting the dog family now is a big challenge for them, hence they have initiated campaign on social media to raise funds, any contribution even if it is small will be very well received.

Unfortunately, the shelter later announced that two of the puppies were dead.

It was later updated that the person who left the mother dog and her puppies had reached out to the shelter president to apologize, claiming that they were strays and that he could not care for them because he had financial difficulties of his own.