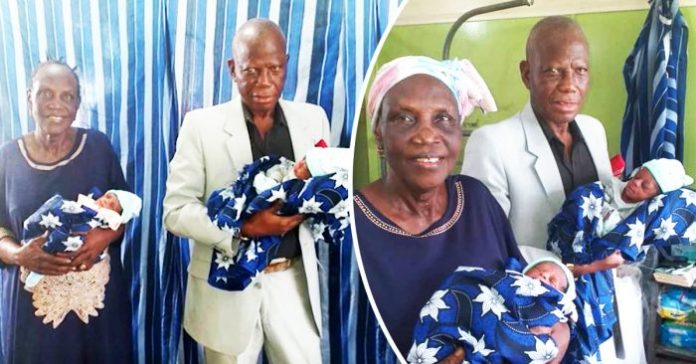 The 68-year old Margaret Adenuga recently gave birth to beautiful twin babies after 46 years of waiting. Before Margaret finally got pregnant, it was said that the strong woman has already undergone IVF procedures for three times.

Her husband, 77-year-old Noah Adenuga revealed that they have been married since 1974 and wanted their own child since forever.

Despite multiple failures they were experiencing throughout the journey, Margaret and Noah never give up.

“I have a dream and I believe our dreams and wishes will come true,” said Noah, who’s now a pensioner.

“I never lost hope any day anyway. I used to tell him (Noah) that before we move out of where we are living, we are going to carry our baby. Our baby will leave with us. Not only one. They are going to be two. And I’m a church goer. So in church I used to see many testimonies that there is nothing God cannot do. So I have faith in that. I stood on my faith that God will do it,” said Margaret.

All the efforts they’ve made up to this day surely didn’t go down the drain as they are now blessed with a daughter and a son at the same time.

The twin babies were born by cesarean surgery on Margaret’s 37th week of pregnancy at the University of Lagos Education (LUTH) Hospital last April.

Dr. Adeyemi Okunowo, who welcomed the twins said that a team of experts had been assigned to monitor Margaret’s pregnancy due to the age factor. Dr. Adeyemi also stated that women at a later age might be able to conceive through IVF, but doctors must bear the medical risks associated with pregnancy at that age.

“As an old woman experiencing her first-time pregnancy, it is indeed a high-risk pregnancy. The babies being twins also adds to that, so we have to manage the pregnancy until it’s over,” said Dr. Adeyemi.

“There are pregnancy-related medical complications for late pregnancy such as premature birth. Luckily, Margaret is fortunate, but the possibilities of other complications after giving birth is still there.”

46 years is surely not a short time. Congratulations to the couple!