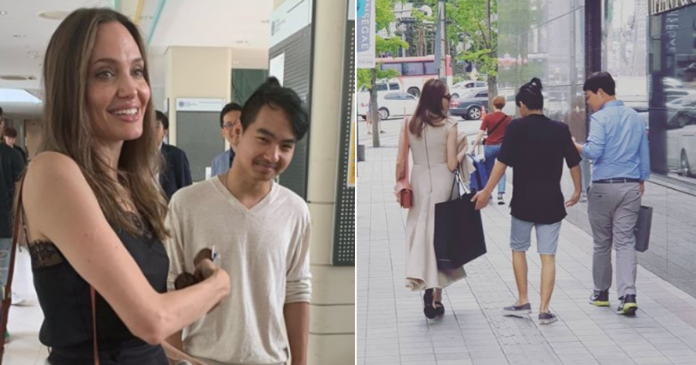 We all know that Hollywood actress, producer and director, Angelina Jolie is a mother of six, but did you know that her eldest son, Maddox is all grown up and now at the age to get into college?

Jolie gave birth to Shiloh, Vivienne, and Knox during her relationship with Brad Pitt, and adopted Maddox from Cambodia, Pax from Vietnam and Zahara from South Africa.

Maddox was adopted when he was seven-month-old from an orphanage in Battambang, Cambodia. He is now 19-year-old and already started his first semester at Yonsei University in South Korea last September 2019, studying biochemistry.

After Jolie’s fans in Korea found out about Maddox getting into Yonsei University last year, most of them didn’t want to miss the sight of Jolie sending her son off in their home country.

Jolie was first seen at the airport dressed in a very casual outfit when she arrived in Korea.

Jolie and Maddox went for a good meal at a Korean restaurant and was spotted shopping in Myeongdong. Not only a pretty face, an employee from the store she visited praised Jolie for her well-mannered and kind personality.

The mother and son were seen eating at a Korean restaurant.

And some other places in Seoul too.

The mother and son finally had to say goodbye to each other when Jolie dropped Maddox at his new college. When asked until when will she be in Korea, Jolie answered that she will leave after dropping Maddox and she tried hard not to cry for being separated from her son.

Jolie was seen around Yonsei University.

“I try not to cry!” said Jolie after sending off her eldest son at the college.

We wish that Maddox will have a wonderful time at his new university!