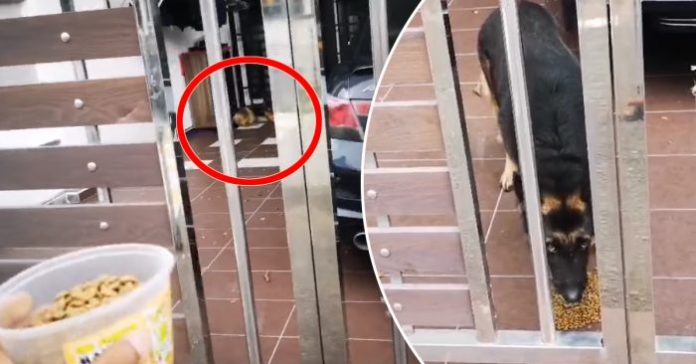 As the world is trying its best to flatten the curve of COVID-19 infections, Malaysia plays its part by extending the enforcement of the Movement Control Order (MCO) or partial national lockdown in the country for another two weeks.

With this implementation, Malaysian working in Singapore can’t freely travel back and forth between the countries anymore as all borders in the country are closed. Upon this, a guy named Muhammad Faiz realized that his neighbor hasn’t been home since the MCO was implemented.

Faiz assumed that his neighbor might be stuck in Singapore and unable to come home as the MCO was enforced quite suddenly. He also remembers that his neighbor raised a dog, which probably is very hungry by now as the owner didn’t come back for quite a while.

Looking at how his neighbor’s dog was not chained, Faiz decided to help feed the dog with pet food and water while the owner is not around.

Since that day, Faiz has been making daily trips to his neighbor’s house to feed the dog.

Faiz is not familiar with dogs at all. He never comes close to one, what more to even feed it. However, in the video footage uploaded, Faiz was seen bravely approaching the dog with food. The dog was seen slowly walking towards Faiz when he brings the dog food in his hand, then places the food in front of the gate for the starving pitiful dog.

Faiz put the pet food right in front of the gate.

“I believe my neighbor might be stranded in Singapore and unable to come home. I’ve been feeding his dog twice a day. Before this, I’m so scared to even look at this dog, now we’re best buddies,” said Faiz.

The dog carefully eating its food. Thank you, Faiz!

The viral video with over 11,000 shares and more than 530,000 views on Facebook has drawn the attention of Malaysians across the country, with many are praising and thanking Faiz for his kind act. Faiz shows that kind gestures in times of crisis go beyond race and religion.

Business Has Stopped Due to Lockdown. The Aquarium’s Staff Fish Out...

These 3 ladies have been best friends for 80 years and...