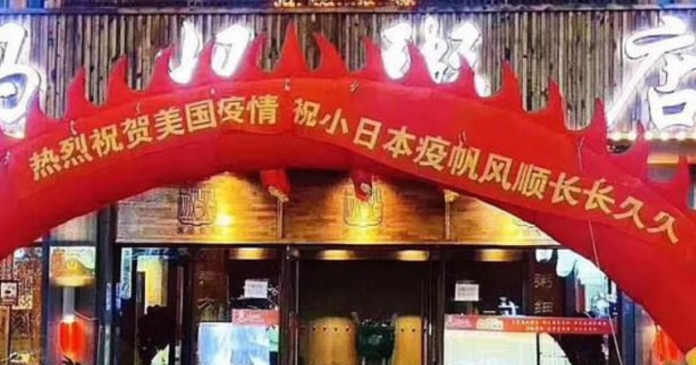 A restaurant in north eastern China has sparked controversy when a rather insensitive banner was put up outside their establishment to celebrate the spread of coronavirus outbreak in Japan and US.

‘Huge congratulations to the American epidemic and long live and smooth sailing the epidemic in little Japan,’ read the bright red banner.

The local franchise owner, Hui claimed that it was merely a marketing strategy to draw in customers. Since the news got social media attention, he had been sacked by the head company.

He has been detained by the police, and even the locals bashed him for being a ‘narrow-minded citizen’ and ‘embarassing the country’.

If you think why anyone would use the grief of two other countries to advertise their business, here’s why. China has a long history of animosity with both Japan and the US, which dates back to the war times.

In 1937, the Japanese Imperial Army plotted the Nanjing massacre, taking the lives of 300,000 Chinese by raping, murdering and stealing from them.

Long-standing territorial conflicts and air strikes which killed more people left a bad scar in most Chinese Nationalists, which turned into hatred.

This resulted in the Anti-Japanese sentiment, and the Chinese mockingly calls Japan ‘Little China’ to indicate that their island-filled country is inferior compared to China.

With the US, it started off with a mutually profitable bond. The Chinese Nationalist Party was supplied with economic and military assistance from the US when they were fighting the Japanese invasion.

However, the divide between the communist and nationalist party leaders caused a political riff in the US-China relation. It worsened when Trump swore in as president, and launched a trade war against China which affected the economy of the country on a large scale.

Both US and China started pointing fingers at each other when the coronavirus pandemic hit, accusing that the virus was man-made in the country’s laboratory as a bio-war weapon to attack the other country, while defending their side with no amiable treaty in sight.

The coronavirus has infected more than 360,000 people worldwide, China and US contributing to a large fraction of the numbers.