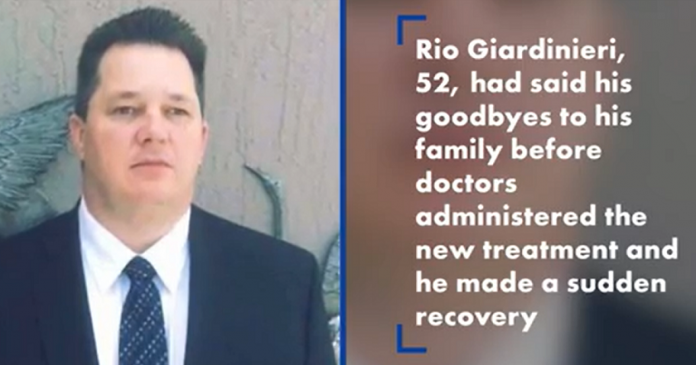 Rio Giardinieri was on the brink of death after being diagnosed for pneumonia and coronavirus. After five days of experiencing harrowing bodyache, fever, fatigue and headache, he decided it was time to say goodbye to his wife and three children.

That was until he came across an article sent by his friend, which contained elaborate details about hydroxychloroquine, a prescription drug used to treat malaria and various auto-immune diseases.

Convinced to try the medicine as the last resort, Giardinieri consulted an infectious disease specialist. However, he was strongly advised against it.

“He gave me all the reasons why I would probably not want to try it because there are no trials, there’s no testing, it was not something that was approved,” the 52-year-old man shared with Fox 11.

Giardinieri wasn’t going change his mind that easy. He explained to the doctor that he really wanted to give hydroxychloroquine a shot as he wasn’t sure he’s going to see the morning light the next day. He was also having difficulties breathing and his symptoms were becoming severe, leading the doctor to approve and administer the drug 30 minutes later.

It took an hour for the medicine to take effect, when he felt like his heart was beating out of his chest. What followed was intense and excruciating.

“They had to come in and get me calmed down and take care of me. I had another episode about two hours later where I just got to the point where I couldn’t breathe and my heart was pounding again so they gave me some Benadryl through the system and something else. I’m not sure what it was. It allowed me to go to sleep and when I woke up at exactly 4:45 in the morning, I woke up like nothing ever happened.”

Giardinieri owns a cooking equipment manufacture company with supplies exclusively to high end restaurants around LA. He believed to have contracted the COVID-19 virus at a conference in New York. He tried reaching out to his regular doctors, but was refused a test.

After a long-awaited diagnosis at the Regional Memorial Hospital in South Florida, he was put on oxygen and quarantined in ICU for a week when doctors indicated his condition is likely to persist with no definite cure.

He believes that it was the drug that saved his life although doctors are of opinion that the reactions he was experiencing after the IV drop was rather his body fighting off the virus than the effect of the drug.

Hydroxychloroquine has been used with coronavirus patients overseas and is backed up by a few studies for its efficiency in curing the disease. Unfortunately, it is yet to be approved by WHO and medical experts worldwide.

Giardinieri was given three doses of the drug and showed no symptoms of fever and breathing difficulties. He is expected to be fully recovered and discharged in five days.