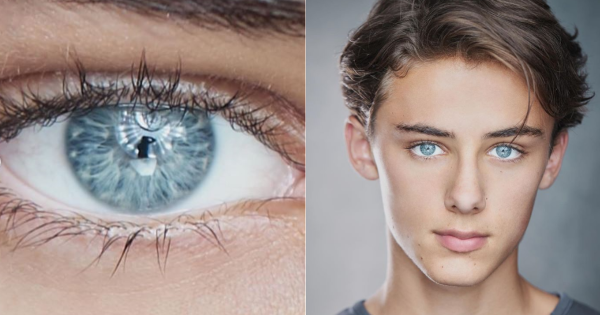 Three years ago, a 13 year-old teen model from Australia became the talk of the Internet due to his charming facial features. He had straight brunette hair, sharp jaw, structured nose and an innocent childlike smile. But the main part of his face that got way too many ladies swooned over him were his electric blue eyes.

Now, three years later, William has emerged on the radius of Internet yet again for the very same reason. Aged 16, the teenager had only become more charming. He is now an actor and model who is working mainly in the UK and US.

While most of his facial features had undergone changes, one remained the same. His piercing blue eyes. From a cute teenage boy, he had evolved into a handsome young adult.

What was even more striking is the fact that he posted another zoomed in image of his eyes where it resembled the many hues of a blue ocean but more importantly, the reflection of the photographer.

William started his modelling career at age 7. he was scouted by a famous modelling agency for his attractive appearance. Since then, the budding teenager has gained a reputation modelling internationally.

He had also acted in three movies in the span of four years.

The multi-faceted model was first touted ‘world’s most handsome boy’ by Japanese netizens after his modelling pictures were uploaded online. It might sound like an exaggeration, given he was only 13, but many agreed that it was well deserved.

William is versatile and flexible when it comes to modelling. Being very comfortable in front of camera, he can pull off different looks using different angles of his structured face.

While some people can pull off a certain color or style even professionally, William does it with ease. Despite being tall and lean, he is muscular in the chest and abdomen area which is revealed in some of his photoshoots.

William frequents the gym regularly to maintain his figure, which is important to his career. He mentions that besides becoming fit, it is also a habit of self-discipline that will pay off in the long run.

In one of the pictures, the 16 year-old was spotted wearing a black biker jacket over a white shirt, hair pulled back into a messy look. The black and white image gave off a dashing, rugged biker image that gives off the impression of an adult.

Then, almost immediately, he switched up to being a sweet little boy by pulling off a casual beach look, donning a floral buttoned down shirt and soft wavy hair.

The emerging model is also musically inclined. He couldn’t help but pick up the instruments at his photo shoots and start playing them.

William is undoubtedly one of the most handsome man anyone has set eyes on. He has an astounding 1.5 million followers on Instagram and regularly shares updates of his work and life on social medias.