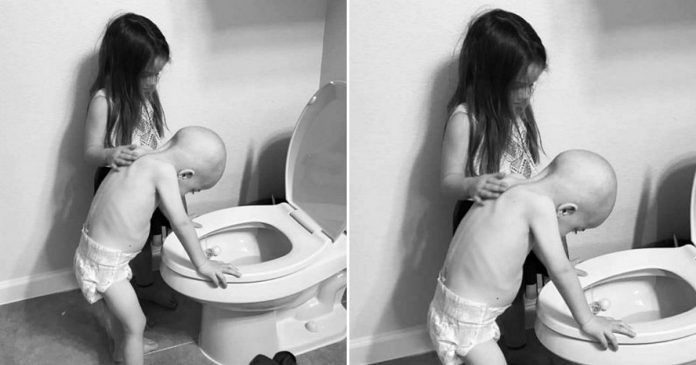 When children her age were out playing with friends and enjoying fun games, 5-year-old Aubrey chose to stay by the side of her sick 4-year-old little brother, Beckett.

Beckett was diagnosed with acute lymphoblastic leukemia back in April 2018.

He has since been spending months in hospital having chemotherapy, blood transfusions, and platelet transfusions. This is when Aubrey decided that she needs to take care of her little brother no matter what and comfort him whenever she can.

Aubrey wanted to help her brother back to recovery and was seen rubbing Beckett’s back while he was sick from chemo during his cancer battle.

According to Aubrey and Beckett’s mother, Kaitlin Burge who lives in Texas, she decided to release the photo that she took back in January 2019 to show the importance of family in times of crisis.

Burge explained that after the snap, her selfless daughter washed Backett’s hand and kindly carried him to the couch. Not only that, Aubrey also offered to clean the bathroom right after.

“When I see them together, it makes me happy but at the same time, it makes me sad. They have an incredible bond. To this day, they are closer, she always takes care of him,” said Burge to The Sun.

Aubrey and Beckett are very close.

Aubrey chose her little brother over anything else.

“She should be out doing gymnastics, running around the neighborhood with the kids, playing in the playground, swimming in the pool – but here she is taking care of her brother.”

Burge explained that she and her husband always encourage Aubrey to go outside and do some other things, but the kind little angel would rather keep an eye on her sick little brother.

Beckett is so lucky to have such an amazing sister!

We hope that Beckett will recover very soon and Aubrey will get to happily play with her adorable little brother again.

She is such an angel!