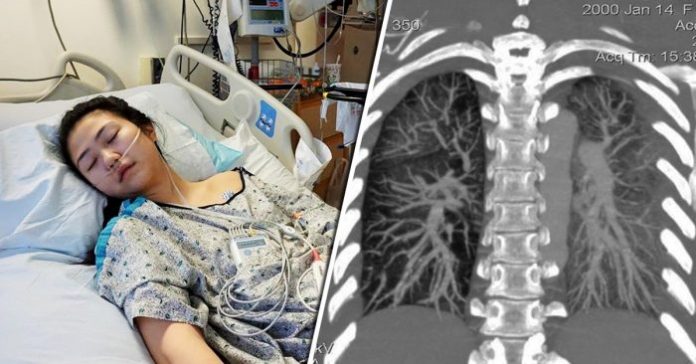 A teenager from Maryland, United States recently shared on Instagram a picture of her being stranded in a hospital bed, various tubes attached to her body. The reason behind her condition? Electronic cigarettes or e-cigarettes.

The woman, Claire Chung, wrote on her social site to spread awareness about the severity of complications involved in smoking e-cigarettes. She added that despite the possibility of her life being saved eventually, the damage in her lungs cannot be undone.

It all started when Claire was suddenly exposed to high fever for three consecutive weeks. At first, she thought it was just a common fever, but the medication she was taking showed no signs of recovery.

With her health condition deteriorating rapidly, Claire decided to go to the hospital’s emergency room last Christmas morning. Unfortunately, much to her despair, doctors were unable to find the cause of her pain. A series of x-rays were performed on her lungs, after which doctors immediately detained Claire at the Intensive Care Unit.

Her lungs were severely inflamed. However, even after conducting various tests, doctors were still looking at a dead end. They couldn’t identify what exactly was the reason behind her illness. That was when Claire figured out that these might be the effects of an electronic cigarette, which she had been actively using.

Following that, doctors affirmed that the electronic device could be the cause of her damaged lungs as they have not had any such cases before. Claire then once again uploaded a picture of an x-ray showing her fogged up lungs.

From the scanned images, it can be seen that both sides of the lungs appear to be cloudy. Healthy lungs should be clearly visible in when scanned under an x-ray.

Claire wrote that it could be her last post, because she is yet to undergo treatments as doctors are still figuring out the appropriate diagnosis to administer to her. She added that before she took an electronic cigarette, she had never experienced cough, chest pain and difficulty in breathing, the symptoms which lead to her current condition.

The teenager also advised people to not use electronic cigarettes and if anyone has already taken them, she hopes they stop before they end up on a hospital bed like her.