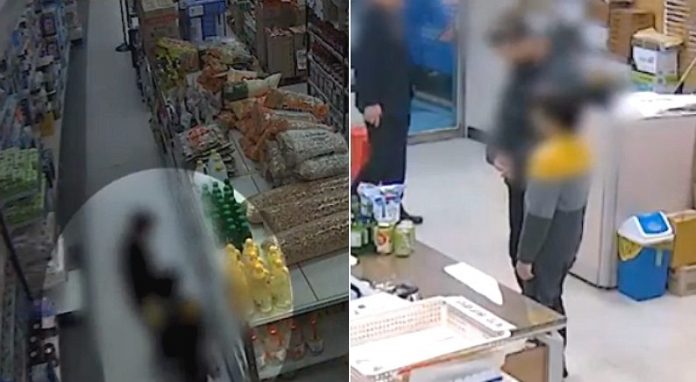 Desperate times sometimes make you do unexpected things. For this struggling father and son, they had to resort to committing a crime that will later teach them valuable lesson.

Yeongjong District’s Incheon Central Police Station received a call on the 13th of December about a stealing incident that occurred at a convenient store located in an area nearby.

The culprit was a twelve-year-old elementary school boy and his father. They were caught by the mart’s staff after they provoked their suspicion.

The boy and man had hesitantly walked across the cash counter, putting two packs of milk, six apples and about 10,000 won in a bag with flimsy gestures.

When he was confronted by the staff, the father was engulfed in embarrassment. He trembled, shed tears, and bowed in front of his son.

“I was so hungry that I didn’t know what to do anymore,” he muttered in a disappointed voice. According to the police who were reported and dispatched to the location of the incident, the situation was more than just a case of hunger.

The man was a taxi driver. However, he had no income for the last half a year because he was not physically capable to continue his work due to diseases such as diabetes and thyroid.

Although he was selected for Korea’s basic living scheme, his family consisted of him, his son, grandmother, and even his youngest of seven of siblings. It was very difficult for four families living in a rental house to make a decent living.

In fact, him and his son had not eaten at all during the day, and it was later found that the dad eventually tried to commit the crime only after the child complained of starvation.

When the convenient store’s employee learned of the situation, he sympathized and withdrew the report. The police then took them to a nearby restaurant for a proper meal.

Then, something incredible happened. A middle-aged man came to the table where the father, son and police officer were seated. He placed a white envelope on the table and hurried out of the establishment without saying a word.

Astounded, the father opened the envelope to a shocked reaction on his face. The envelope contained 200,000 won in cash. His son quickly followed the man to return the envelope. The man pushed the envelope into the boy’s hands, insisting him to “just take it.”

Apparently, the man was watching the father and his son who were caught by the police at the mart. He incidentally listened to their story and was moved by their hardship. Without thinking twice, he took out some cash to go to the restaurant and hand over the envelope.

According to the police, they were asked to give a letter of appreciation to the kind citizen, but they could not find the man. The police then got in touch with the local administrative welfare center to help the father recover his health and get a job, and help his son get free meals at school.

In addition, the owners of the convenient store pledged that they would support the family by providing basic provision and other necessities.

The police said, “It would take a selfless person to come forward and help these unfortunate people without asking for anything in return. The society is hopeful when it comes to humanity.”