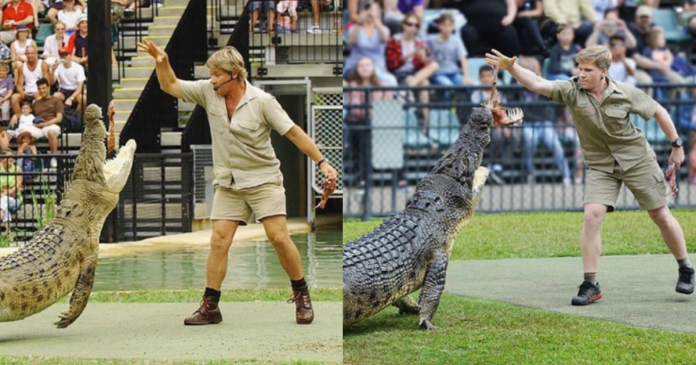 Robert Irwin was only 2 years old when his father, Steve Irwin, a beloved Australian wildlife conservationist and popular television personality died in a tragic accident involving a giant stingray. 15 years later, Robert paid a tribute to his loving father by recreating one of Steve’s most memorable moments in his career.

Growing up surrounded by various species of wildlife, young Steve was used to playing with lizards and small crocodiles at his parents’ Beerwah Reptile Park.

He later took over the reptile park from his parents which has now been renamed Queensland Reptile and Fauna Park.

After marrying Terri Raines on June 4, 1992, instead of going on a honeymoon, the newlywed couple filmed a documentary about a crocodile in Far North Queensland

The documentary proved to be a success as it later turned into a television series entitled “The Crocodile Hunter”, which consequently led to the nickname that Steve earned throughout his career

Unfortunately, during the filming of the documentary “Ocean’s Deadliest”, Steve passed away in 2006 after a short-tail stingray stabbed him in the chest multiple times

He passed away before the paramedics arrived, leaving his wife, Terri with their children, Bindi and Robert who were still very young

Both Bindi and Robert have continued their father’s legacy as Robert working as a wildlife presenter and starred in a 2018 reality show “Crikey! It’s the Irwins” with his mother and sister

Just like his father, Robert is not afraid when it comes to facing deadly reptiles like giant crocodiles

Hence, in honour of his father’s legacy, Robert decided to recreate the photo of Steve feeding a crocodile.

In the heartwarming post, Robert wrote that it was the same crocodile that his father fed 15 years ago, Murray.

Not only it was shot in the same location and the same crocodile, but Robert also appeared to strike an identical pose just like his reptile-loving father.

The side-by-side photos of him and his late father made thousands of fans emotional as many commented that Steve would be proud of Robert if he could see his son today.

“Can’t begin to imagine how proud he would be Robert,” Australian TV presenter Lisa Wilkinson commented while actress Emmy Perry wrote, “This is truly everything! Your Dad must be overjoyed to see you literally walk in his footsteps.”

Robert is not the only one continuing his father’s work as his sister, Bindi, is also staying committed to wildlife conservation in Australia

In an interview with LadBible, Bindi shared his determination to keep his father’s legacy alive with the help of his family members

She also has her own television show, “Bindi The Jungle Girl”.

“With our work with Australia Zoo and our non-profit organisation Wildlife Warriors, every single day of our lives is spent continuing Dad’s legacy and making sure that everything he lived for and worked so hard for carries on into the future,” she said.