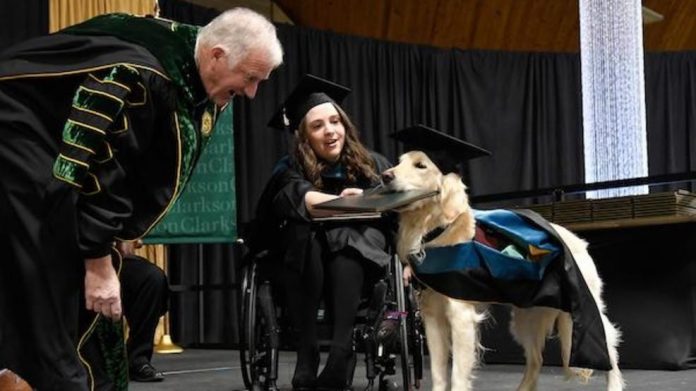 Brittany Hawley is a 25 year-old from North Carolina. She was diagnosed with a chronic neurological disease when she was a teenager which had her confined to a wheelchair for the rest of her life.

Shortly after, she applied for a service dog to assist her with her daily routines, and that’s how she and Griffin became inseparable. Hawley met Griffin through program called ‘paws4prison’ that teaches inmates in West Virginia prisons to train high-level assistance dogs.

“The inmates allow many dogs to come up to you and let the dog choose you. Some dogs were scared of the wheelchair. Griffin jumped right into my lap and licked me across the face,” Hawley shared about her chance meeting with Griffin on USA Today.

Hawley graduated from Clarkson University recently and received her master’s degree for occupational therapy. It was a double celebration for her as Griffin too, was bestowed with an honorary diploma for his tireless service for the years Hawley was studying.

Griffin did almost everything for Hawley. He accompanied her to her classes. He fetched her cellphone. He was an active participant in Hawley’s community activities, social groups and research projects. He was even there during her internship at Fort Bragg.

When the 4-year-old golden retriever received his scroll, the board of trustees agreed that he portrayed “extraordinary effort, steadfast commitment and diligent dedication to the well-being and student success” that lead to Hawley’s achievement.

“I pushed for him to graduate from Day One. He did everything I did,” Hawley prided.

Together they helped soldiers with physical immobility and psycho-social disorders. The patients got so accustomed to Griffin that whenever they mention about Hawley being their therapist, they would include Griffin as their co-therapist.

On a day-to-day basis, Griffin assists with most of Hawley’s physical tasks such as opening the door, turning the lights on and bringing her things she points at with a laser pointer.

To Hawley, the one thing she’s most thankful about Griffin is the comfort he provides when she is anxious or depressed due to the constant terrible pain she experiences.

A service dog refers to any dog trained with highly intelligible skills to assist and provide comfort to people with disability, mental condition or any sort of condition that qualifies the service of the trained dog.

Tying a Red Strap on Her Wrist for a Safe Return,...