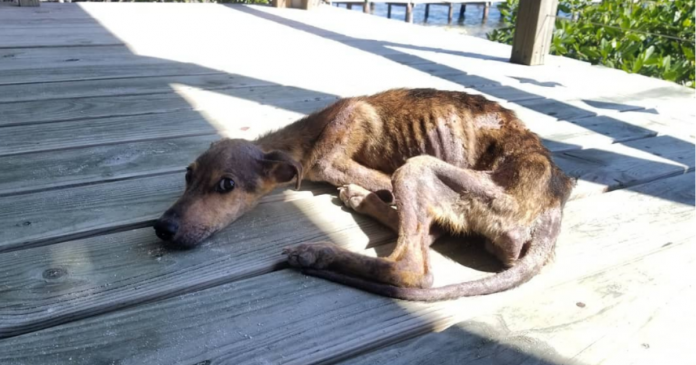 With only 36 hours left until he leaves Belize, photographer Wesley White found himself in a tugging situation that later on changed two lives. One was his and the other was the dog he found stranded on a small desert island.

Wesley, originally from Montana was on a business trip to Belize. He managed to squeeze in some free time in between so he decided to go kayaking to an inhabited island not far away from the resort he was staying at in Isala St.Dangriga.

He arrived at the small island, and docked near a mangrove swamp for some shade. As he was documenting the breathtaking view of the pristine water and sky around him, his eye caught the figure of a skinny animal making its way towards him.

It turned out to be a dog, severely emaciate and malnourished. The little survivor still managed to wag his tail at Wesley despite having lost all of his furs, with ribs protruding his wounded skin. Perhaps he was finally happy to see a human after having to survive alone out in the middle of nowhere.

Wesley was stunned as to where was the dog from and how he ended up there in the open ocean. More than that, he was devastated at the condition of the poor dog. It didn’t take him long to make the right decision. He placed the dog in his kayak and went all the way back to Thatch Caye Resort.

“When I brought this dog back, I really had no idea how it was going to be. At best, I told myself, I’m going to take him home and he will live safely in Montana with me,” he shared.

Back at the resort, Wesley gave Winston (that was the name he gave the dog) a much-needed meal. Winston must have been starving because he ate it all up so quick and went on to take a nap.

Wesley let him rest before transporting him to the Stann Creek veterinary hospital in a boat. The thin dog was examined and found to be infested with mites. He was dehydrated and emaciated. Thankfully, his organs were still healthy despite his condition.

“We would be grateful for all the help and we will continue to publish updates on the progress of this brave little dog,” he wrote on his GoFundMe page asking donations to cover the expenses for Winston’s recovery.

The next morning. Wesley had to return to Montana leaving Winston behind with a heavy heart. Thanks to the generosity of kind people, Winston’s full treatment was paid for and he was placed in foster care at the Placencia Humane Society.

Then the day Wesley was waiting for arrived. Winston was approved to travel to Dallas, where Wesley picked him up from.

“It only took him a few moments to sniff me and recognize me, I think what happened on the island was etched in his memory,” he recalled of the time they met at the airport.

Now, almost a year later, Winston is no longer the skinny frail dog that he was. He lives with Wesley and his two other dogs, Bell and Anna. He has two best friends and a human companion who gave him a second chance at life.

Winston is happier and healthier than ever with Wesley. The found each other and changed their lives forever.

Elderly Couple in Korea Shared 76 Years of Companionship – A...