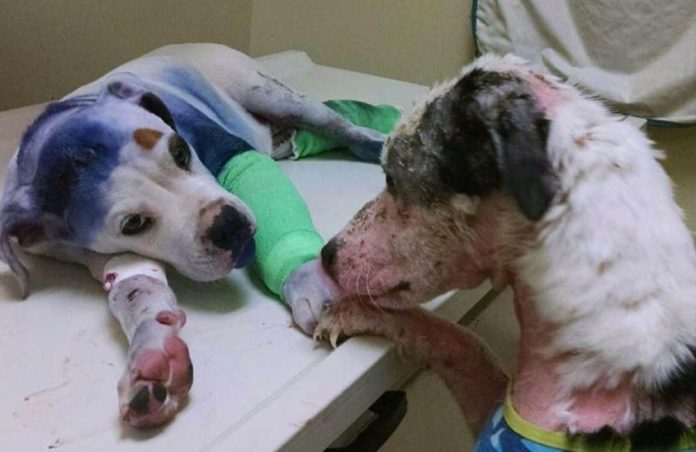 At some point in our lives, we have heard of destiny bringing together two unlikely parties under one fated circumstance, and how they went on to share great experiences and memories together.

Simon and Sammie’s tale is one such destiny.

Sammie is a 5-month old boxer puppy who has endured a heinous abuse when he was just 3 months old. A bullet was put through his head, after which he was dragged behind a car along the road and painted with blue spray all over his body. At least one of his hind leg was severely damaged from the incident.

A few months of surviving in a shelter, he was later brought in to the Paws and Claws Animal Clinic in South Carolina by Rescue Dogs Rock NYC, a canine rescue and rehabilitation organization which funded the treatment for the battered pup.

This is where Sammie met Simon, the 1 year-old border collie who was being treated for mange at the same clinic. Simon was also rescued from another shelter a few weeks prior.

The moment Simon was let out of the cage, he walked towards Sammie right away. The precious image of a budding friendship was posted on the Facebook page of Rescue Dogs Rock NYC.

“Last night Simon came in to check on Sammie and see how he was feeling….Sammie accepted [Simon’s] soft touch and was grateful for the love and affection that Simon showed him,” the caption read.

Perhaps it was the compassion they had for one another, or an indescribable understanding of the traumatic past they both shared that fostered an instant connection between them.

Dr. Mike Sauer, owner of the veterinary clinic said that its “basically a miracle” that Sammie survived being shot in the head with a .22 caliber, though the bullet didn’t puncture his skull, as reported in Yahoo.

While Sammie lay motionless on the operating table, Simon gently gets up on two legs and extended his paws to Sammie in a comforting gesture.

Jackie O’Sullivan, cofounder of Rescue Dogs Rock NYC, shared with The Dodo that “the compassion and understanding between animals” is something beyond her comprehension.

Since then, Simon never left Sammie go out of his sight. He would check on him every night, lying next to him and accompanying him through his journey of recovery.

Simon’s skin disease was healing gradually and he was starting to gain weight. Sammie, on the other hand, recovered after a few months of thorough treatment.

Rescue Dogs Rock NYC updated about his status on their Facebook page, with a touching caption.

It’s incredible how animals can teach us so much about being strong and kind and to selflessly share love with fellow being even in difficult times. We hope Sammie and Simon continue to be paw-mates for life.