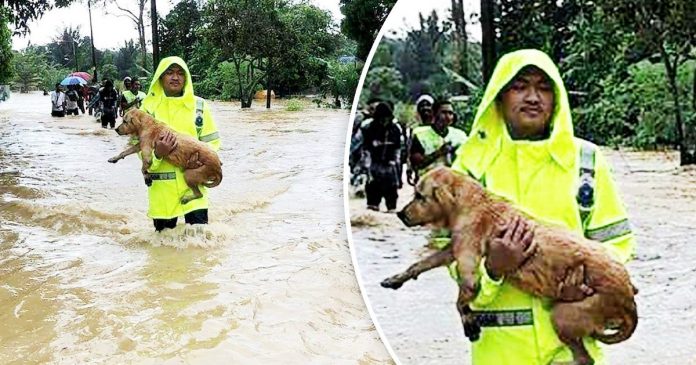 Natural disasters are becoming more prevalent as we are approaching the turn of the decade due to the inevitable aftermath of climate change. In South East Asian countries, especially Malaysia, the last quarter of the year marks the beginning of monsoon season.

As the stormy weather sets foot, it often leads to massive floods in the coastal regions of the country. It has become a yearly phenomenon that affects the lives of the residents.

They are required to evacuate their homes and take shelter in the nearby community centers until the flood subsides. Besides humans, the flood also puts the lives of animals at danger. Strays are left unattended on the inundated streets and they end up becoming casualties that no one bothers about.

Recently, an officer from the Response Team Unit of the Royal Malaysia Police Force appeared in the headlined for rescuing a distressed dog that was caught in the flood at Kota Tinggi, Johor.

The incident was shared by the Royal Malaysian Police on their official Facebook page. They emphasized how all living being, including animals are their responsibility to be relocated in times of emergency.

The image shows a rescue worker clad in poncho, carrying a dog drenched in flood water as he tread through the knee-high pool of water to a safer place. He’s not the only hero, though.

Another image that was circulated online showed another rescue worker leaving a flooded house with a big blue basket in his hands. Inside it were two clueless kittens that were saved from the house. They were later brought to a shelter for safety.

In another area, a dedicated rescue team were photographed getting four buffaloes out of the muddy streams they were stuck in. The animals belonged to a resident nearby and he had contacted the rescue team for help.

Though it took them over an hour to move the beasts out of the danger zone, the mission was eventually a success.

Comments poured in on the posts, commending the dedication and compassion these rescue personnel showed in caring for the helpless animals.

Humbled by the responses, they replied that they were only doing their job. It’s heart warming to know that these animals are not disregarded in times of emergency and are considered a priority to be rescued.