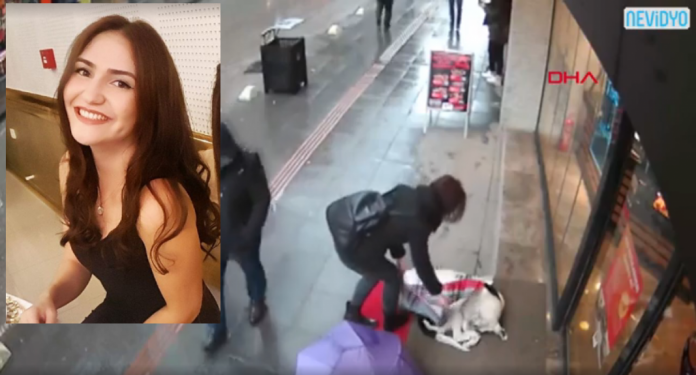 Earlier this year in January, a woman in Turkey was caught on camera for her random act of kindness towards a stray dog who was sleeping outside of a cafe. She probably never thought that a surveillance camera was recording her kind gesture the whole time.

It was drizzling and the weather was chilly when she saw the stray dog curling up outside of a cafe in Zonguldak, Turkey. The woman opened her umbrella and was ready to leave the cafe when she noticed a stray dog.

The dog was curling up beneath the front door overhang.

Apparently, the heartbreaking sight of the stray dog curling up had moved the woman’s heart.

Unlike other passersby who tended to ignore the stray canine when they entered or left the cafe, the woman decided to do something for the dog

It was just a simple gesture and empathy that the woman showed to the stray dog but it definitely did not go unnoticed.

The heartwarming footage of the sweet encounter quickly made headlines in Turkey as various media outlets praised the kind-hearted woman with one calling it, “Humanity is not dead.”

it did not take long before the woman in the footage was identified as Duygu Elma. Upon realizing that her random act of kindness went viral on the internet, Elma said that she never expected that her action would receive attention from many people.

“I couldn’t imagine that my actions would receive this attention. I’m very surprised about it,” she told The Dodo.

When asked about what led her to give her scarf to the stray dog, she said, “The weather was so cold. I just couldn’t take it when I saw him shivering.”

Elma said that was the last time she saw the stray dog but she remained hopeful that it had been taken care of by other animal lovers in the neighbourhood.