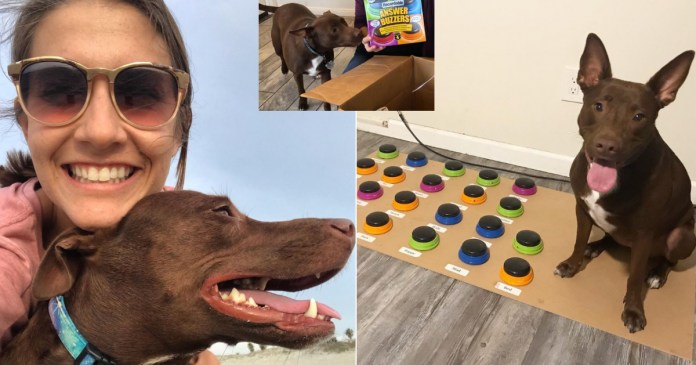 Speech-language pathologist Christina Hunger is living the dream life that many pet owners wish they have – owning a pet dog that can talk to humans.

This may seem unlikely but the 26-year-old has devised a tool that allows her pet dog, Stella, to communicate with her and specify her needs.

Whether she is hungry, thirsty, wants to go outside for a walk or just wants her favourite squishy toy, the device lets Christina understand what exactly Stella wants her to know.

The amazing project started off when Christina and her fiancé Jake created a button that says “outside”. The couple then pressed it every time they said the word or opened the door to make Stella familiar with the meaning of the word.

After just a few weeks, every time Stella wanted to go outside, she began to step on the button.

That was when Christina started to add more buttons and more words for Stella and the results were incredible!

There was a time when Stella pressed the button that corresponded to the word “water” when Christina told her that it was time to sleep. Turned out, Stella’s dish really needed to be refilled when Christina went to check her bowl.

According to Christina, she created the device for Stella after wondering if her dog could really communicate with her when she understood all the words Christina had been saying all this while.

“If dogs can understand words we say to them, shouldn’t they be able to say words to us? Can dogs use AAC to communicate with humans?” Christina wrote on her Hunger For Words blog.

Hence, that is why Christina responds to Stella’s message accordingly as soon as possible instead of rewarding her with a treat when she pressed the button to communicate.

“Instead of rewarding Stella with a treat for using a button, we responded to her communication by acknowledging her message and responding accordingly,” Christina wrote.

“Stella’s voice and opinions matter just as our own do.”

Today, Stella’s vocabulary has expanded to over 29 words and the dog can even combine up to 5 words at the same time to make a sentence.

“The way she uses words to communicate and the words she’s combining is really similar to a 2-year-old child,” Christina wrote.

For pet lovers who wish for their pets to communicate with them, Christina said that talking to them would be a good start.

“First thing to do is talk to your pet,” she said in an interview with CNN. “Notice how they’re already communicating and start putting words to those gestures or vocalizations that they’re using.”

“Then you get the buttons and program them with those words, use them all the time, and show your pet how to use them as well,” she continued.

Following the journey that Stella and she have gone through in their relationship, Christina believes her soundboard could help transform the special bond between humans and their pets.

“I think how important dogs are to their humans,” Christina said. “I just imagine how much deeper the bond will be.”

The Father Suspected His 5-Year-Old Daughter was Not His Own Upon...