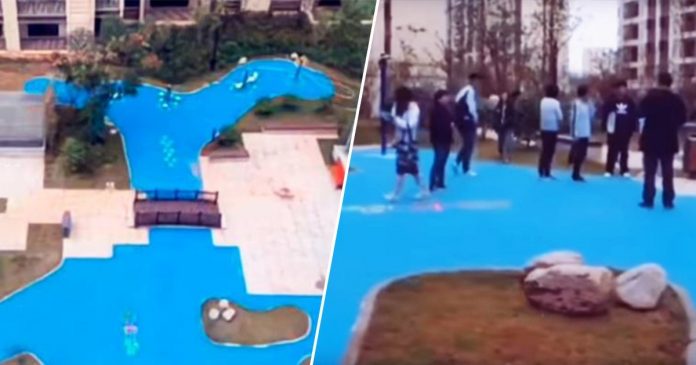 Buyers who purchased new apartments in China were less than impressed when they found out that their new home was not what they were expected to look like when they were handed the keys over the weekend.

The new residential complex was advertised to have amazing facilities and views such as “high vegetation cover” and “park lifestyle” by the real estate developer.

Instead, the buyers were surprised with a public area covered with blue plastic material to make it look like a lake.

The only thing real about the “lake” was a small timber bridge on the paving, as reported by Hunan Satellite TV’s City Channel.

It was totally not what was expected when one look at a photo of what was supposed to be an artificial lake taken from the top floor of the apartment.

At first glance, many would think that the blue area was indeed a small lake.

One of the disappointed buyers was quoted saying, “So I’m supposed to be standing in the middle of blue water, which in fact doesn’t exist. There is no rock or plants.”

However, the developer, Changsha Shiji Yujing responded that they never promised to build a small artificial lake in the estate, according to SCMP.

According to them, they only promised a “natural idyll”.

Disabled father sends son to school every morning by using his...