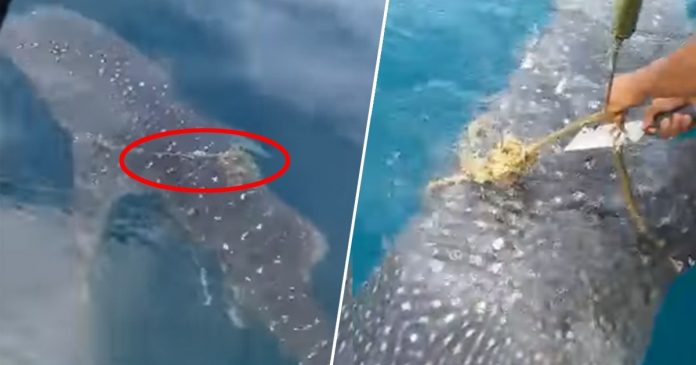 In a recent video that has gone viral on social media, a whale shark in distress made a desperate call to a kind-hearted group of Malaysian fishermen to remove a rope around it.

It began when the whale shark swam up to the fishermen’s boat and continued to stay by the side of the boat for a while.

In an attempt to help remove the rope, they later took a pole with a hook and used it to pull the shark closer to their boat.

Amazingly, the whale shark did not resist at all as if it had completely trusted the group of fishermen to help it out!

The video then shows one of the fishermen uses a cleaver to cut the rope off .

Just when it was finally freed off the rope, the whale shark decided to swim off but that was not before it waved its fin to the fishermen to say thank you!

The video even shows the fishermen waved goodbye to the whale shark and took the rope out of the water so that no other marine animals would get stuck with it.