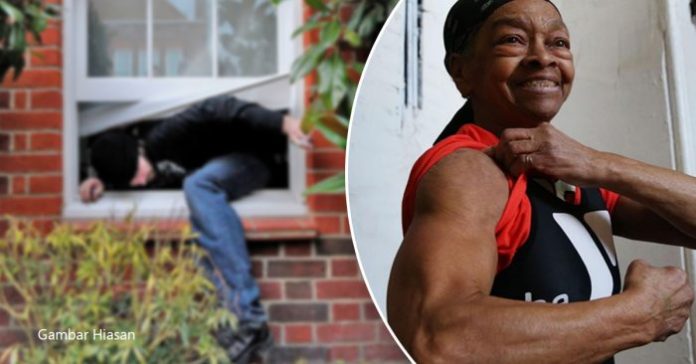 Hearing someone knocking down on your door when you’re home alone at night doesn’t always end in an outcome favoring the victim. It doesn’t make it any easier that the potential victim is an 82 year-old woman.

However, the odds worked in the favor of Willie Murphy when an intruder broke into her house in Rochester, New York. It was just after 11 o’clock at night when she heard persistent poundings on her door.

“He was outside and saying, ‘Please call an ambulance. I’m sick, I’m sick,’” she said to WHAM. Sensing something was wrong, she called 911 right away. The banging ensued but she didn’t open the door.

It was then when the man got agitated and broke the door and got into her house. “It’s kind of semi-dark and I’m alone, and I’m old. But guess what, I’m tough. He picked the wrong house to break into,” she shared with CNN.

What the man didn’t know, and will soon regret is that 82 year-old Willie is an award-winning bodybuilder who does powerlifts daily at the YMCA. Now that she was out of the intruder’s sight, she used her quick-thinking and grabbed a table closest to her.

“I picked up the table, and I went to work on him. The table broke. And when he’s down, I’m jumping on him, ” she explained of the situation.

Using the metal legs of the table to keep him down, she then sprinted to the kitchen, got hold of a bottle of baby shampoo and squirted it right into the man’s eyes as he weakly tried to gather himself off the floor.

Willie didn’t stop right there, no. “I got the broom. He’s pulling the broom. I’m hitting him with the broom,” she said. Perhaps the man decided he couldn’t take any more blows, so he was trying with all his might to leave the scene.

“He wants to get the heck out of there. And I’m trying to help him get out of the house, but he’s too heavy. I can’t move him. He’s dead weight,” she told CNN. Though she can deadlift 225 pounds easily, but that night she couldn’t get the man out of her house.

By then, the police arrived and learned that Willie had really given the intruder the hardest hits of his life. “The officers that came wanted to go on my front porch and take selfies with me,” she chuckled.

The man was brought to the hospital in an ambulance, which Willie escorted the man into. She thinks that the man was greatly relieved that the worse nightmare of his life was finally over.

Flexing her muscles while sharing the story, Willie hopes that it inspires women out there to stand up for themselves in times of trouble.