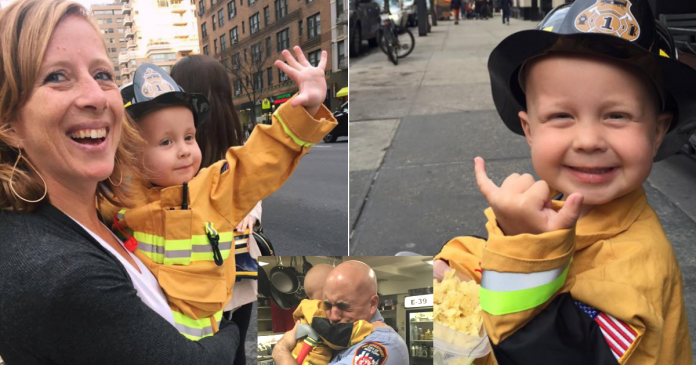 The life of this youngest firefighter in New York City is truly inspiring!

3-year-old boy Trucker Dukes, from Maui, Hawaii, USA, was a big fan of firefighters, perhaps due to the fact that his father is a firefighter in Maui County.

Unfortunately, little Dukes was diagnosed with stage 4 cancer known as neuroblastoma when he was only one year old.

After Trucker was diagnosed with cancer, he moved to New York with his parent for cancer treatment at the Memorial Sloan Kettering Cancer Center.

During his stay in New York, Trucker befriended the city’s firefighters in January 2015

On March 21, 2016, the FDNY were called out to the Ronald McDonald House in NYC because of a burned dinner. There was no danger and Trucker and his mom were out walking in the city. They arrived just as Captain Jim pulled up to the building in his fire truck (the 3rd one to arrive). Capt. Jim saw little Trucker’s excitement and walked right over to him and Shauna like he showed up for Trucker. Capt. Jim hadn’t heard about Trucker and didn’t know how much fire trucks mean to the toddler. Trucker went into his arms like they were friends. It was like something out of a movie.

On May 31, 2016, Dukes’ little wish to become a firefighter came true after he was sworn in as an honorary member of FDNY firefighters.

Sadly, the firefighter boy lost the battle against cancer a year later in March 2017

His memorial service later was attended by over 1,500 people including firefighters and those whose lives were touched by the boy’s journey to fight against cancer.

Following the passing of their youngest comrade, the NYC firefighters decided to engrave five plaques in honour of Dukes.

“I have never been to a plaque dedication for a non-firefighter,” said Chief Michael Gala, Manhattan Assistant Borough Commander with the FDNY to Hawaii News Now.

“That has to let you know how special that little boy was, that he will be memorialized in this firehouse for eternity.”

Dukes may have left the world but his fighting spirit will remain alive among New York City’s finest fallen comrades.

Five months after Trucker’s death, his father updated Trucker’s Facebook page to announce that his tombstone had been installed on July 26th. He also wrote a very moving message to Trucker:

“Your headstone got installed today. It has been four months and twenty two days since you left. It’s so strange because I’m somehow comforted that your headstone is installed now and honors you and your legendary life, but heartbroken because no matter how many times I visit your grave I know your not here with us. I miss you so much kiddo. “

“It feels like I have a hole ripped in my heart. Remembering our times with you, like we were reminiscing the face you made when eating limes today, is like walking on the edge of a sword. The memories bring so much joy, but cut deep at the same time. Know that there is not a day that goes by that I don’t think about you.”

A Russian Woman Rescues a Bear that was Abandoned When It...