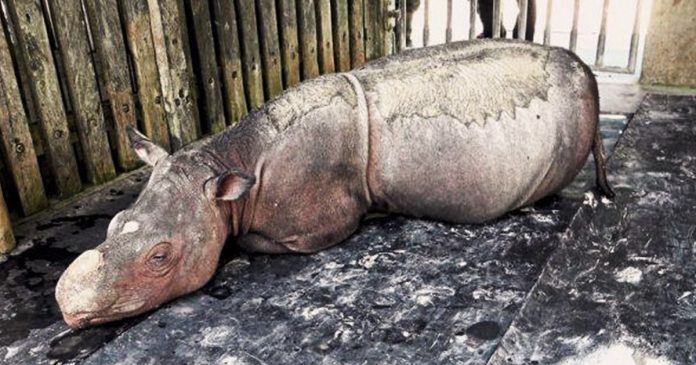 “It is with great sadness that the Sabah Wildlife Department announces the death of Iman, the last Sumatran rhinoceros in Malaysia, at 5.35pm on Nov 23,2019, ” said State Tourism, Culture and Environment Minister, Datuk Christina Liew.

“Its death was a natural one, and the immediate cause has been categorised as shock, ” she said, as reported by the New Straits Times.

“Iman was given the very best care and attention since her capture in March 2014 right up to the moment she passed.”

While the tumour was not malignant, it had spread to her urinary bladder, according to the New Straits Times.

Unfortunately, there was no way that Iman could remove her tumour as the surgery would be too risky and there would be an inevitable major blood loss.

Following the diagnose, she was taken under extensive care by a team of caregivers led by Dr Zainal Zahari Zainuddin at Tabin Wildlife Reserve.

While many attempts like fertilising Iman’s ovum with frozen sperm have been done to make sure the species do not go extinct in Malaysia, the efforts were in vain as the sperms were of poor quality.

The semen belonged to Malaysia’s last male rhino named Tam who died in May this year.

With the passing of Iman and Tam, the number of Sumatran rhinos in the world is now down to 80 individuals, all of them are living in Indonesia, according to National Geographic.

Experts believe that the isolation of Sumatran rhinos is what has led the species to go nearly extinct today.

Female Sumatran rhinos can develop cysts and fibroids in their reproductive tracts if they go too long without mating. It was the same factor to Iman’s fertility.