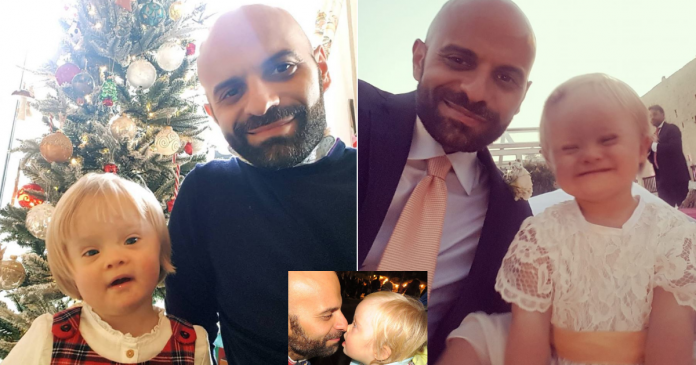 Abandoned by her own mother because she was born with Down Syndrome is already upsetting but to be rejected by another 20 families is absolutely heartbreaking.

Lucky for this little girl, she finally has someone to call family after Luca came to her life.

Alba who was born with Down Syndrome was abandoned by her own mother as she required extra care and attention.

The baby girl was then put up for adoption but her poor circumstances continued when she got rejected by 20 families.

Apparently, all of them were not ready to take care of a baby who had special needs like Alba.

For a while, Alba did not have someone that she could call her parent until Luca Trapanese came in her life.

As someone who has been involved in volunteering in several social service programs, Luca was well aware of how devastating it could be for vulnerable children like Alba to find a family that could accept her as she was.

“Since I was 14 years old, I have volunteered and worked with the disabled so I felt I had the right knowledge and experience to do it,” said Luca.

Hence, that was why Luca decided to adopt the blond-haired little girl as his daughter.

“When I first held her in my arms, I was overcome with joy. I felt she was my daughter straight away,” said Luca to BBC.

“It was the first time I held a newborn baby. Before that moment, I have always been scared. But, when I first held Alba, I knew I was ready to be her dad.”

However, it was not easy for them to become a family as adoption agencies usually prefer traditional families.

Meanwhile, Luca was anything but a conventional parent. He is a homosexual man who became single after a 11-year long relationship.

Thanks to his continuous effort to fight for Alba’s custody, he eventually became a legal guardian for Alba and the two finally became a family!

While it is true that children with Down Syndrome need special care and extra attention, Luca said that he felt blessed for having the chance to become Alba’s father.

“She brought me happiness and a sense of fulfillment. I am proud to be her dad,” he said.