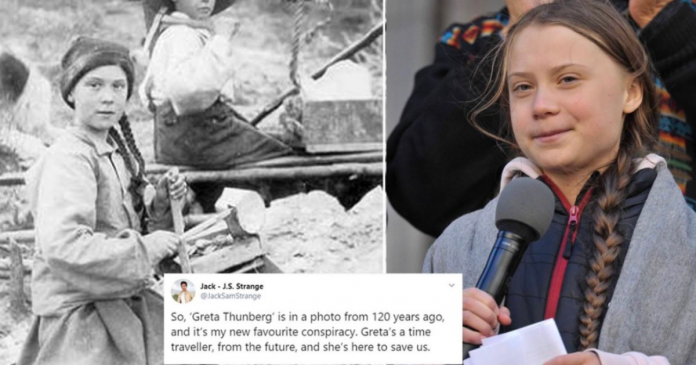 Is Greta Thunberg actually a time-traveler who came from the future to warn humanity about the climate change crisis? Some people think so with the discovery of a girl who looked eerily similar to Thunberg in an image taken in 1898.

In the now-viral image on Twitter, the photo which featured Thunberg’s lookalike is an image of three children extracting water from a well in Yukon Territory in Canada, 121 years ago, according to CNN.

One of the girls shown in the photo looks totally similar to Thunberg including her long braided hair as well as her intense gaze.

The photo was first discovered in the picture archives of the University of Washington before it later made rounds on the internet thanks to a conspiracy theory claiming that Thunberg is a time-traveler.

Greta Thunberg loses hope in changing current world’s mind about Climate Change, decides to travel back in time to when it all started pic.twitter.com/I7ikBtNzJ4

Many internet users were quick to share their thoughts about Thunberg being the savior of humanity from the climate change crisis.

While the photo has been making rounds on the internet, archivists at the University of Washington, however, are doubtful that the image is a piece of evidence that Thunberg can time-travel.

“We’ve had about 15 to 20 requests just to talk about the photo, and we’re getting into almost the triple digits now, in terms of requests to use the photo,” Lisa Oberg, an archivist at the university told the CBC.

At the moment, Thunberg has not responded to the conspiracy theory yet as the activist has already on her way to Portugal with her zero-emissions yacht.

I want to thank all the people who I’ve met I North America for their incredible hospitality. And thank you all for your amazing support!

Nevertheless, she did share a black and white photo of herself on Twitter where she can be seen at Standing Rock Reservation in North Dakota.

While many people seem to believe that she is actually warning all of us about the imminent threat to humanity, perhaps, Thunberg might just have a really timeless beauty.