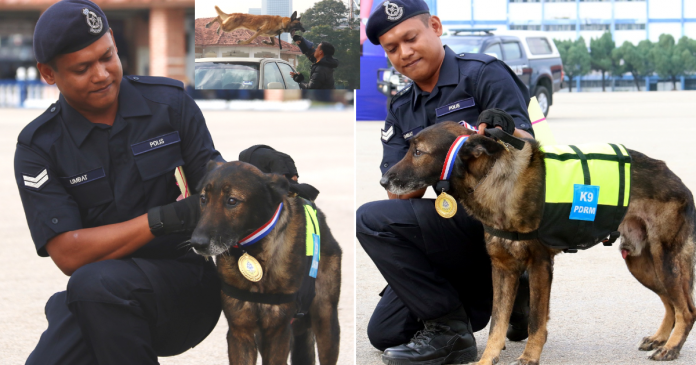 Meet the 12-year-old awesome canine detective of the Royal Malaysia Police who was awarded a medal after he helped solve a murder case, Urby.

The German Shepherd who works for the Royal Malaysia Police led the K-9 unit in the discovery of a murder victim on October 12.

According to Harian Metro, the remains of the 35-year-old victim was successfully discovered in bushes by Urby.

Thanks to the crucial discovery, the Royal Malaysia Police eventually managed to solve the murder case last month.

As recognition of Urby’s huge contribution to the murder case, the police decided to award him a medal during the closing event of a K-9 unit handler course at the Police Training Centre.

According to a post uploaded by the Royal Malaysia Police on their official Facebook account, a well-trained police dog can search a building faster and more effectively than 10 police officers.

These canine detectives often give huge contributions to the police as they can easily sniff out drugs, suspects or dead bodies.

In the past years, the K-9 unit of the Royal Malaysia Police has helped solve countless cases including high-profile incidents like murder and kidnapping.

Kudos to Urby and his handler for helping the public and keeping the peace!

From blue to red in 1 second—Russian figure skater wows audience...