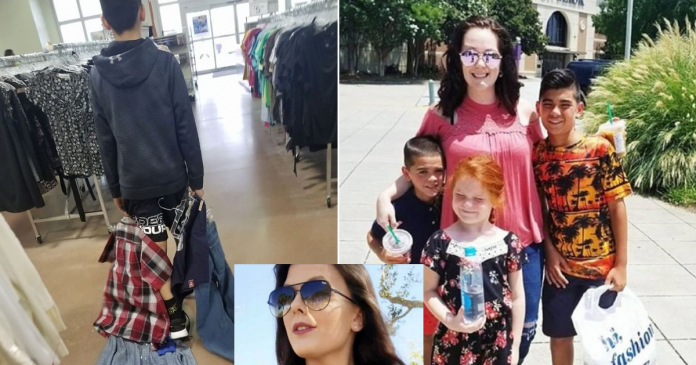 After noticing how her 13-year-old son making fun of his friends who shop at Goodwill thrift store and acting like he is “too good to shop at Walmart”, a mother from Georgia, USA, decided to teach her son a lesson that he would never forget.

In her viral Facebook post, Cierra Brittany Forney shared on how she taught her teenage son about being modest and not judging others based on their appearances.

According to Forney, her son was making snarky comments about his schoolmates who shop at Goodwill and acted like a spoiled child.

“So lately, my 13-year-old son had been acting a little… entitled. Acting like he’s too good to shop at Wal-Mart or making snarky comments about kids at school who shop at the goodwill and quite a few other things,” the mother wrote on her post.

“I don’t tolerate that,” she added.

In the hope to teach her son the value of a hard-earned dollar and a good attitude, she later made him use his own cash to buy Goodwill clothes and wear them to school for a week.

In her post, Forney also included photos of her unwilling son dragging clothes along the floor of a Goodwill store.

“Today, he took his own $20 to the goodwill to buy clothes to wear the entire week to school. Whatever he found is what he would have to wear,” Forney explained.

The mother of three wrote that she was aware that her son did not like the life lesson she gave to him at first.

Nevertheless, she knew it was what she needed to do in order to teach him about being humble.

“He isn’t happy and shed a few tears but I firmly believe in 15 years he will look back and laugh at the day his Mom made him shop at goodwill,” she wrote.

Forney also wrote that she also shops at Goodwill from time to time and loves all the amazing deals she could find at the thrift store.

Her post quickly garnered over 600,000 likes in just two days after she shared it on Facebook with most of the comments applauded her effort to teach her son a humbling life lesson.

Some even shared their preferences of shopping at thrift stores to find new clothing at a great bargain.

Nonetheless, there were some who criticised her parenting skills, saying that her son would grow up hating on her. However, Forney explained that she just wanted the best for her son to grow up to be an empathetic and thoughtful person.

“I DO NOT care what anyone has to say about my post because I SOLELY did this to help my son become a better man,” Forney wrote in a following post.

As for her as a mother, what is important is that her son has learned a lesson from his recent attitude.

“My son has learned a valuable lesson from this AND he is rockin’ the button-up shirt he bought from the Goodwill with PRIDE today!!!”