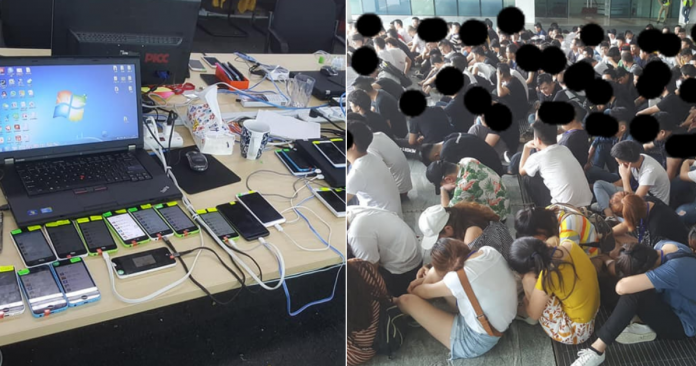 Scamming syndicate is turning into a prevalent crime all around the world. From local scams to international ones, scammers seem to somehow find a way to infiltrate into your personal data and retrieve information and assets easily.

Recently, a much serious modus operandi is being adapted by online scammers; posing as government entities issuing out ‘official’ letters bearing certified stamps and signatures and making calls warning their potential victims of impending ‘legal’ issues.

Though these scammers work hard, the Immigration Department of Malaysia has proved that they have been working harder. On Nov 20, the largest online scam in the country was busted in their headquarters in Cyberjaya.

The success of the raid was announced in Malaysia Immigration official Facebook page, attached with multiple videos of them in action.

The scam syndicate is believed to be run by almost 1000 Chinese nationals in a six story building rented specifically for their online schemes. The pictures posted online shows rows and rows of computers attached to multiple smartphones and multiple high-tech gadgets used to scout and virtually extort their victims.

Videos taken by locals portray the dramatic cause and effects of the raid as at least 50 scammers were caught on camera running for their life across a busy street.

A few of them were even seen escaping through the windows, landing themselves on trees and struggling to get away from being caught.

If the image we had of scammers were those from movies where they’re dressed in suits and smart casual outfits with glasses paired with unsuspecting wit, then we’ve got it all wrong.

These people were dressed in worn out t-shirts and pants with nothing as an obvious giveaway to what they do behind the screens, considering it took months of undercover works for the Immigration Department to pin them down and execute the plan.

One particular video shows a man being taken down on an alley by an immigration official as he tried to scoot away with his ‘colleagues’ who had managed to make it to the main road away from the premise.