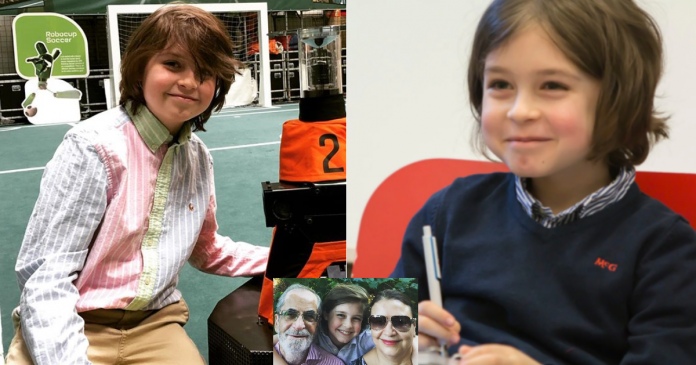 While graduating from the university with a Bachelor’s degree is the least concern of most 9-year-old children, child prodigy Laurent Simons is just a month away from completing his engineering course next December!

Electrical engineering course is tough even for students at an average graduate age.

Nonetheless, it seems that the course is just a walk in the park for 9-year-old Laurent from Belgium who is planning to take a Ph.D. program in electrical engineering after he graduates next month.

According to his father, Alexander Simons, Laurent even plans to study a medical degree while completing his Ph.D. program later on.

Some of the first few people who know that Laurent is gifted are his grandparents who later told the boy’s parents that he had a gift.

Both Alexander and Laurent’s mother, Lydia, thought that the boy’s grandparents were just exaggerating until his teachers later said the same thing.

“They noticed something very special about Laurent,” said Lydia to CNN. “They told us he is like a sponge.”

Laurent may come from a family of doctors but Lydia has her own theory on how the boy is capable of learning anything so quickly.

“I ate a lot of fish during the pregnancy,” Lydia said.

Laurent completed his high school education in just one year when he was 8 years old before he continues with his Bachelor’s degree.

Real ‘Brabants Worstenbroodje’! Just Wanted To See Where All The Fuzz Is About! ? ? Tasty!! #laurentsimons #brabantsworstenbroodje #streekproduct #brabant #thenetherlands #picoftheday

Despite there are special students like Laurent who arrange for adjusted schedules to cater to their exceptional learning abilities, Laurent still remains a top student at his university.

My First Designed Printed Circuit Board! So Exciting! ? Thanks To My Brilliant Mentor, Prof Baltus, I Learned So Much From Him! ?#laurentsimons #profbaltus #mentor #electricalengineering #grateful #picoftheday

“Laurent is the fastest student we have ever had here,” Sjoerd Hulshof, education director of the TUE bachelor’s degree in electrical engineering said.

“Not only is he hyper-intelligent but also a very sympathetic boy.”

While Laurent himself enjoys studying, his parents believe there is a need to strike a balance between his studies and him not missing his childhood.

“We don’t want him to get too serious. He does whatever he likes,” said Alexander. “We need to find a balance between being a child and his talents.”

The child prodigy enjoys playing with his pet dog, Sammy and games on his phone like his peers

Nevertheless, unlike most of the friends his age, Laurent has already set out a goal that he wants to achieve after he graduates: developing artificial organs.

He plans to take a well-deserved vacation in Japan before continuing his Ph.D. program at the university of his choice soon.

Walmart cashier walks 6 miles to work, gets surprised with a...