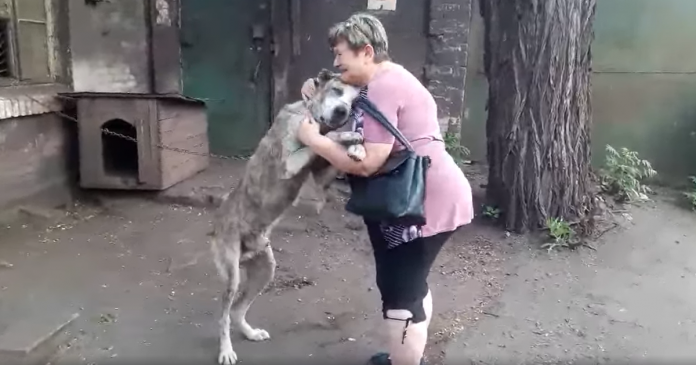 July 5th, 2017 is an unforgettable date in Natalia Stadnik’s life. It was the day Lord, her Central Asian sheepdog had escaped and believed to be stolen from her.

She staged an elaborate search spanning the entire city of Mariupol, Ukraine together with her daughter Vika, but to no avail. Devastated, Natalia posted pictures and details of her beloved dog all over social media and around the city.

Her heart would flutter with hope whenever she received a phone call or email, but the excitement would hamper down as soon as it began when they all prove to be of no use. She even received blackmails from scammers claiming to sell Lord off to dog fighting syndicates unless they were paid.

Two years passed and Natalia’s yearning for her dog grew stronger. She was on the verge of losing all faith of getting him back until one day, her Australian friend stumbled across a lost dog post on the Facebook page of a non-profit animal welfare organization called Happy Animals, running in the very heart of Ukraine.

When she was acknowledged of the uncanny resemblance the lost dog bore to Lord, she quickly contacted Galina Lekonova, a staff member of the shelter who had posted the details online.

She managed to take a quick look at the pictures and amidst the emaciated body, protruding ribs and multiple open wounds decorating the shabby fur, her heart recognized him.

“She’d been looking for her dog for two years,” Galina told The Dodo.

A meeting was set the following day and Natalia was growing more and more excited and nervous. The day finally came. Both Lord and Natalia were standing only a few feet apart from each other.

Lord seemed apprehensive at first. He barely recognized her. It must’ve been all the hardship of living on the street that made him skeptical and aggressive towards people’s intentions. He was hesitant and didn’t show any signs of recognition.

Natalia braced herself and called out his name. “Lord, Lord, Lord”. And then, everything changed. Lord turned around and gave her his paw, affirming his trust on the person whom he recognized as family.

“He was sticking his head against me like a little baby,” she recalled as he got up towards her and started showering her with kisses.

The reunion was so emotionally intense that it brought tears to the eyes of everyone who was watching.

Lord was brought back to his home where even the cat recognized him, mentioned Natalia on the shelter’s updated post about Lord’s encounter with his long-separated owner.

Happy Animals thanked everyone who had shared the initial post and helped to make the reunion possible. “Thanks to you that the dog’s life was saved, and peace returned to his owner’s soul!” they wrote.