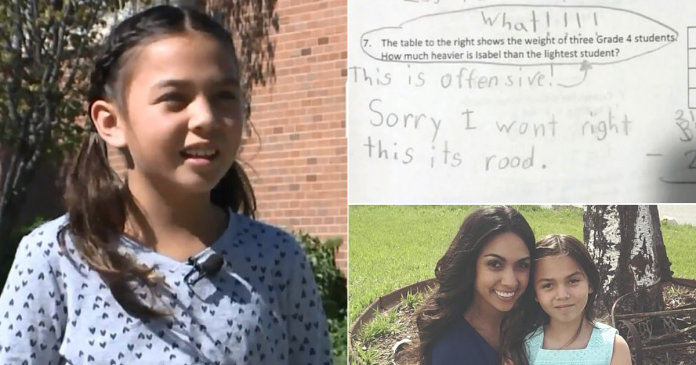 For those of you who love a challenging math problem, here’s a question: ‘The table to the right shows the weight of three Grade 4 students. How much heavier is Isabel than the lightest student?’

For many, this might come off as a regular question. Not to 9 year-old Rhythm Pacheco. She is a fourth grade student in Grant Elementary School in Murray, Utah.

Her attack against the math question she came across in her homework has caused quite a stir in the local scene.

“I thought it was offensive. I didn’t like that because girls shouldn’t be comparing each other. I know it was a math problem… but I don’t think that was really okay,” Rhythm explained to Fox 13.

Supporting her stance was Rhythm’s mom, Naomi. She was equally astounded when she read the question after her daughter refused to answer it.

Apparently, the previous questions bore questions asking students to compare things such as fruits and animals hence giving an impression of the area of knowledge fourth graders could relate to.

“I feel like it’s such an irresponsible way to teach children how to do math,” Naomi added, agreeing that it gives the wrong message about body image especially in teenage girls.

She made it clear that she understood it was just a question but still it’s not the appropriate situation to base a math question on. She was also concerned that her action would bring her trouble because she was graded for it, so she included a written letter to explain her decision.

Daily Mail included words from the letter as followed; “I don’t want to be rude, but I think that math problem wasn’t very nice, I thought that was judging people’s weight. Also, the reason I didn’t write a sentence is because I just didn’t think that was nice.”

Her teacher responded to the situation well and even spoke to the school management about it.

Eureka Maths, who provides the curriculum to the school defended their modules. They stood by their stand, saying that they have been using the very module for six years and this is the first time they ever received a complaint.

“There is no value judgment in the question about weight, it’s merely a comparison,” stated Chad Colby, the Director of Marketing Communications for Eureka Math.

Naomi responded to that saying that they failed to see the implied message a simple question as such carries.

“I think we have other resources and other ways of teaching our children math and how to weigh proportions, objects, people, without direct comparisons — especially comparing little girls.”

Though it’s unclear how the situation reached an ultimatum, its refreshing to see young girls voicing out for views they stand strong by.

Stop biting your nails or increase risk of getting COVID-19 infection,...