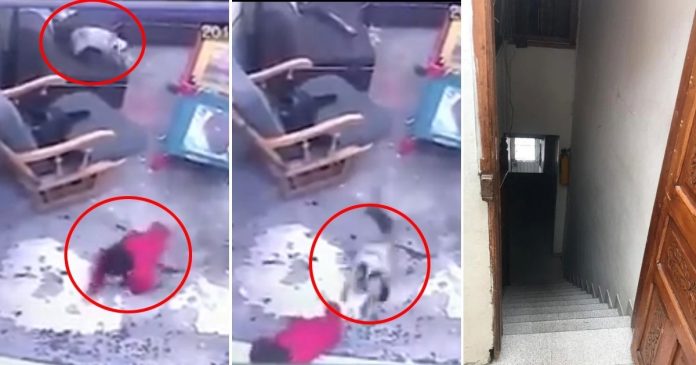 Cats, unlike dogs. do not possess approachable attributes. Generally, they are grumpy, independent creatures with no regards for human interaction unless on their own terms.

However, one particular cat proved to stand out from its kin when it became an internet sensation overnight.

In a video posted on Facebook by ‎DLore Álvarez, Gatubela the cat is seen standing on a couch somewhat looking over a toddler who’s playing at a distance across the hall.

Recorded on a CCTV, the child is seen moving around on the floor next to his crib with no adults around.

Just as we thought it was a harmless act, the baby begins inching towards an open door leading to what clearly looks a flight of stairs.

As all eyes are glued on the child and his fate at gamble, the cat prances on him in the sliver of a second.

Gatubela began engaging the kid, distracting him away from the stairs.

The toddler, one year old Samuel stopped moving and the cat remained at the door to stop him from further approaching.

Though it’s unclear if the cat actually knew what it was doing, it is being hailed as a hero for its quick act.

The video received mixed reactions from public. Praises came in flooding for Gatubela but criticisms were equally dished out on the parents’ negligence as well as the non-conducive environment of the house.

It was a lucky day for the toddler but this doesn’t give way for the parents to depend on a cat to babysit their child every other day. It’s only a matter of time before things get out of hand.