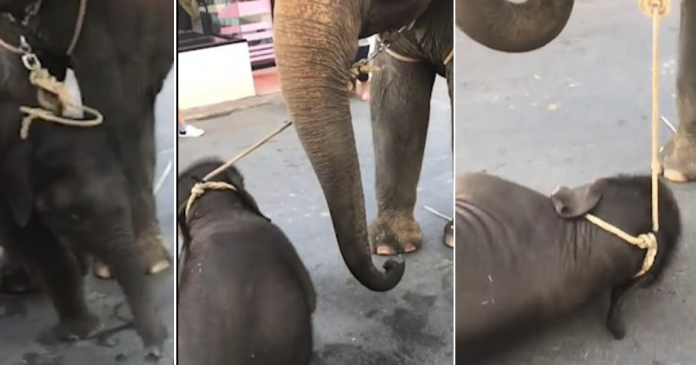 Elephant rides have become an integral part of tourist attractions in Thailand. What better way to connect with nature than to ride on their backs and look at the beauty the world has to offer in the elephants’ view, right?

Except that in reality, the entire experience is far less exciting, probably not for the tourists but certainly for the elephants. In a video filmed by a concerned tourist, an elephant calf was seen collapsing after being dragged around tied to its mother’s neck.

The one year old baby elephant is from the Nong Nooch Tropical Botanical Garden in Pattaya, eastern Thailand. While the mother was carrying tourists on her back, the calf lost its balance and fell on the ground in exhaustion, writes Daily Mail.

Worried, the mother gently tries to bring her baby back to its feet to continue the ride. The temperature was peaking to 40 degrees but that didn’t stop the giants from carrying on with their tour.

“This baby elephant was so exhausted, and you can see the mother comforting and encouraging her to get up,” a tourist expressed.

She was a teacher who migrated from Phillipines to Myanmar. On her vacation to Thailand with her friends, she claimed to have spotted many baby elephants with similar fate around the city.

“There are many more baby elephants tied with their mother walking around with tourists at their backs enjoying under the heat of the sun while these elephants are suffering. I’m just worried about elephants, and I want to make sure they’re looking after their well-being,” Daily Mail reports of her statement.

Acknowledging the unfavorable impression their establishment is gaining, a spokesperson for the botanical garden addressed that the elephants are ‘healthy and very well treated’. He added that health problems are promptly treated by veterinarians, though the calves are in prime health.

However, this isn’t the only case involving baby elephants. A few months ago, 2 year old Dumbo died having his front legs stuck in mud. Even before the incident, Dumbo was treated poorly as his bones were visibly protruding on his skin.

A campaign group, Moving Animals said he was skeletal and forced to do tricks with soccer balls and Hula hoops and even standing on his two feet on a small podium.

They filmed Dumbo’s fateful video and circulated it online, appealing for a petition to release him into a proper animal sanctuary.

The initiative drew in more than 200 000 signatures in just one week. Alas, the baby elephant’s life came to a quick end before they could make it happen.

A vet report revealed that Dumbo had been long suffering from complications that included digestive tract infections, constant diarrhea and malnutrition.

“No animal deserves a tragic story like Dumbo,” said Amy Jones, co-founder of Moving Animals. They hope that their efforts will spread awareness to the public of these animals’ fate and join them in making a change.