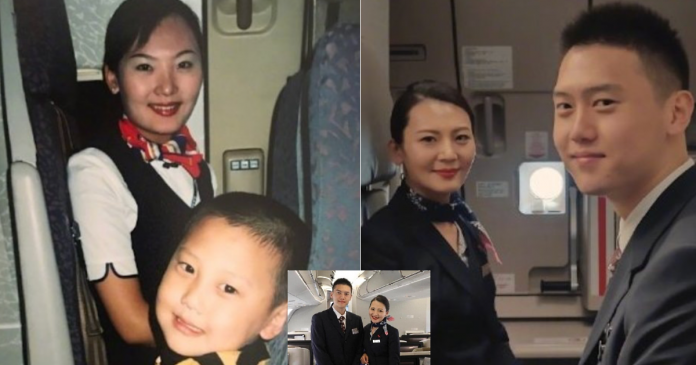 Xu Yang Feng was only five years old when he boarded his very first flight and took a picture with one of the flight attendants, Fang. Little did the boy know that he would be working side by side with Fang as her junior 15 years later!

According to Beijing Youth Daily, the third-year aviation crew student still remembers the first time he flew and was not bothered by the idea of flying.

In fact, 5-year-old Xu loved every second of it and even managed to take a photo with one of the flight attendants named Fang

Apparently, the fond memory of flying has been stuck in his mind ever since and it is also one of his motivations to become a flight attendant himself.

15 years later when he joined China Eastern Airlines for his internship, Xu remembered the photo he took during his first flight and shared it with his colleagues.

That was when his supervisor saw his photo and asked him if he wanted to meet Fang again to which he said yes.

It did not take long before his supervisor helped to arrange for the two of them to meet.

After 15 years of their first meeting, Xu finally got to meet the first flight attendant who served him as a little boy!

To mark the occasion, Xu and Fang took the chance to recreate the very first picture they took together 15 years ago

According to Fang, she remembers Xu as an adorable and chubby boy who she served on the plane almost two decades ago.

“The plane model is different, and there are some differences in the position of the seat, but the feeling I had back then and now is still the same,” Fang said.

Thanks to the remarkable coincidence, the airline even made a further arrangement for Xu to complete his internship under Fang’s supervision. Who knows that their first meeting 15 years ago was a fateful one!