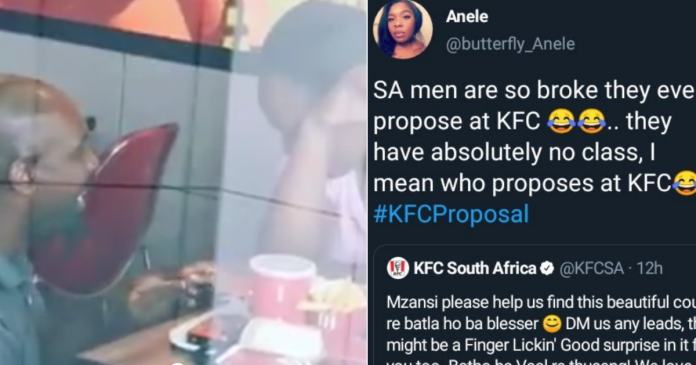 A couple from South Africa received a hate tweet from a journalist after the man proposed to his fiancée at a local KFC restaurant. While the hate tweet was meant to poke fun at the man’s effort for proposing at a fast-food restaurant, it turned out to be the biggest blessing for the couple as companies keep sending offers to sponsor their wedding!

In a recent video that has gone viral on social media, a South African man can be seen kneeling on his knee as he proposes to his fiancée at a KFC restaurant.

The couple was later celebrated by other customers in a joyous reaction to the romantic proposal.

A surprised observer later took to Twitter to share the heartwarming proposal and it quickly caught the attention of many people including KFC South Africa who asked for help from the public to identify the lucky couple.

“Please help us find this beautiful couple,” the Twitter account posted on Thursday. “DM us any leads, there might be a Finger Lickin’ Good surprise in it for you too … We love love,” KFC South Africa tweeted

Mzansi please help us find this beautiful couple, re batla ho ba blesser ? DM us any leads, there might be a Finger Lickin' Good surprise in it for you too. Batho ba Vaal re thuseng! We love love ?❤️ #KFCProposal pic.twitter.com/6bj89dtj4j

While most comments reacted positively to the romantic proposal, there were some comments which spewed hatred towards the choice of location where the proposal took place.

Reacting to the viral video of the #KFCProposal, the journalist which goes by the Twitter handle @butterfly_Anele shared her comment.

“SA men are so broke they even propose at KFC…They have absolutely no class, I mean who proposes at KFC. #KFCProposal.”

The hate tweet was meant to troll at the couple on their supposedly the happiest day of their lives but little did the journalist know, sponsorship and supports started to pour in for the couple!

After the hate incident went viral on Twitter, more than 100 companies have sent offers to sponsor the couple’s wedding

So far, they have been receiving offers from top South African companies like Siwela Wines, AM Lodge, Audi South Africa and Total South Africa

These honeymoon destinations look far. Someone needs to drive them there. We got you.? #KFCProposal https://t.co/oiOMWX48Zp

The couple has not announced their wedding date yet but it appears that they already have got the biggest day of their life sorted out with an impressive list of sponsorships!

Updated list of the things donated or contributed so far.

Note: Not everyone is here already, so post those that are not here under this tweet. #KFCWEDDING#KFCProposal

On the other hand, the table has turned for the journalist as the Internet has refused to accept her regrets despite her eventually apologizing for the comment she wrote. She has made her Twitter account private ever since.

Never judge anyone's standard of living. This must be a dream come true, beginning of happy life. pic.twitter.com/UbT5cGW5gI

As for the couple who were later identified as Bhut’ Hector and Nonhlanhla, they were grateful for the kindness and supports they have been receiving since the proposal video went viral.

In an interview with SowetanLIVE.E., the couple explained that they had originally married in 2012 but Hector was not satisfied with the ring he bought for Nonhlanhla and that he wanted to get his wife something better,

“I don’t work so I didn’t have enough cash to give wife Nonhlanhla a befitting wedding/jewellery but wanted to do something small,” Hector said.

“Thank you South Africa. Your kindness has truly warmed us. We would have never imagined that our love story would have touched so many of you,” the couple said.