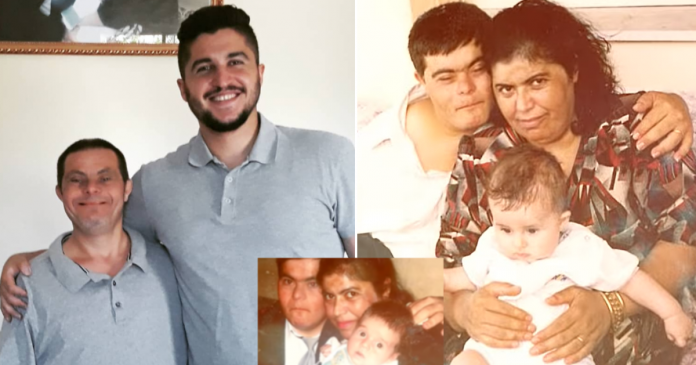 When it comes to people with genetic disorders like Down Syndrome, many people would think that they are vulnerable and heavily dependent on others to go about their lives. However, one doting son proves just how much his father who has Down Syndrome is more than capable to raise him.

“If I could choose who my father is, I wouldn’t think of someone else and I’m proud of him the same way he is proud of me.”

Keeping a career for more than 25 years Being a husband for 23 years Supporting your kid and being a dad for 21 years These things are surely not easy to achieve, couldn't be prouder of you?? #savedownsyndrome #savedownsyndromeambassador

In a heartwarming video featuring Issa, the aspiring dentist shares his experience growing up as a son to a father with Down Syndrome.

According to him, many people may perceive that having a genetic disorder is a huge challenge in parenthood but his father made it look easy.

Despite his genetic disorder, Issa’s father tried his best for Issa to have everything he needed when he was a young child

“During my studies, he was the biggest supporter, economically, psychologically and in all respects and thanks to his support,” Issa said in the video.

Issa added that as his father has always been a warm and loving person not only to his family but also to everyone in their community, he is well-respected and loved for who he is

"Simple can be harder than complex, you have to work hard to get your thinking clean to make it simple. But it's worth it in the end because once you get there, you can move mountains." ~Steve Jobs

He attributed his success in his studies and life to his father and the sacrifices he has made.

“When you see a person, perceived by the community as vulnerable person or a person who is dependent on the community working hard and trying to do everything to secure everything I need as a small kid, this will, of course, push me to do all I can to be the best person,” Issa said.

He understood just how hard his father tried to provide him and his family and for that, he was grateful.

A Man Whose Wife Falls Ill and Half Paralyzed Has Gone...