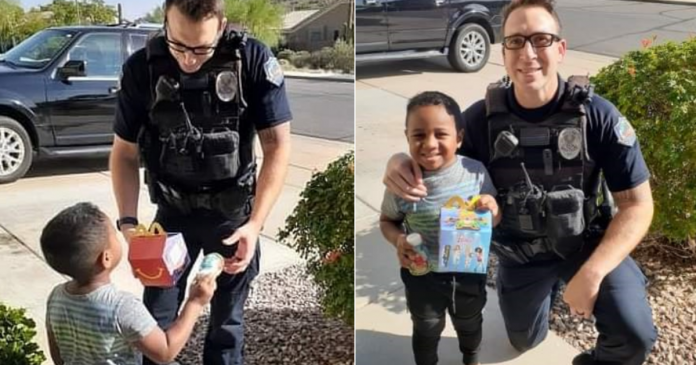 It was definitely not the usual kind of 911 emergency call when a 5-year-old hungry boy named Charlie, called them to order a Happy Meal on October 30.

“Hi, is this McDonald’s?”, Charlie asked the local 911 dispatcher who answered the boy’s call, Anthony Bonilla.

Confused by Charlie’s innocent question, Anthony responded, “No, this is the Mesa Police Department. Do you have an emergency?” to which the boy replied by specifying what his emergency was.

“Can I get one Mc-Happy Meal?” Charlie said and the boy quickly hung up on the call.

Nevertheless, to check whether or not there was an emergency happening at the boy’s home, Anthony later made a follow-up call and talked with Charlie’s father

The boy’s father explained that the hungry boy must have used his phone and assured the 911 dispatcher that everything was fine.

“It kinda made my day,’ Anthony told Charlie’s father. “He was asking me if I was McDonald’s and if he could get a Happy Meal.”

However, due to protocol, Anthony told the boy’s father that he had to dispatch local police to their home for a further check.

Nonetheless, kind-hearted officer Randolph ‘Scott’ Valdez who was assigned to check on Charlie at his home thought that it was a good idea to surprise the boy with a Happy Meal!

After confirming that there was no emergency at home, Officer Valdez gave Charlie the Happy Meal he ‘ordered’ and the boy could not get more excited!

According to Charlie’s mother, Kim, they were surprised when they realized the boy had called 911 to order a Happy Meal. “When we found out Charlie had called 911 we were a little shocked and quite embarrassed! I didn’t know he even knew what 911 was!”

However, she felt relieved when the officer handled Charlie’s call with kindness

“When Officer Valdez showed up he asked Charlie if he had called someone and ordered something. Before he gave him his Happy Meal he kindly explained to him when the right time to use 911 is, and make sure to only use it for a true emergency,” Kim said.

The hilarious incident later was shared by the City of Mesa Police Department on their Facebook account and the internet just loved how it turned out.

“Awesome to see a PD turn this “accident” into a learning moment with a treat, too! Thank you for caring,” said a comment

Meanwhile, another comment also shared a similar incident in which her grandson called 911 to ask for some chocolate milk.

“My grandson called 911 twice for chocolate milk. The dispatcher called us and let us know that “a little boy wants chocolate milk.” That was 10 yrs ago and we still tell the story.”

As for Kim, she was thankful for Officer Valdez’s kindness and generosity for surprising Charlie by delivering a Happy Meal he wanted as well as helping him to understand what a 911 is.

“My son was able to learn several valuable lessons that day and we will continue to pay it forward as we look for small ways that we can spread a little kindness each and every day.”

This 9-year-old boy is about to become the world’s youngest university...