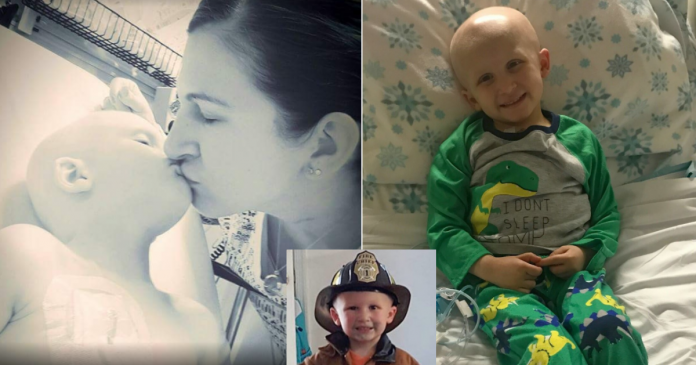 Children are said to be angels sent from heaven. Their heart is so pure and selfless that sometimes we could use a lesson or two from them on how to be better humans. Their simple, innocent acts and loving words can surely humble any conceited being.

Though most get to witness their little angels grow up, some are unfortunate enough to be called back to heaven too soon. Nolan Scully was a 4 year-old boy who was the world of his parents. At such young age, Nolan had battled with a deadly cancer with great courage and faith even us adults couldn’t muster.

He was diagnosed with rhabdomyosarcoma, a rare soft tissue cancer when he was just 3. To document his journey, and to inspire other kids like himself, Nolan’s parents created a Facebook page for him.

Nolan Strong was not only a memoir of their son, but also a source of hope and faith for kids who suffer similar fate. Every post, every picture of him tangled in tubes and surrounded with medical equipment had one thing in common, Nolan’s warm smile. bright eyes and his undeterred will.

Months of radiation, chemotherapy and painful procedures were seem to be working in favor of Nolan as he was starting to recuperate slowly. His parents, Ruth and Jonathan were beginning to see the ray of hope.

However, it was short-lived. The doctors had one significant diagnosis made and they were called to discuss the result. They hoped for the best but were prepared for the worst as well. When the oncologist disclosed that the cancer was at a point of no return, they knew they had to let their little angel know.

When Ruth asked Nolan if he was in pain, he answered he was indeed suffering but will continue fighting for his mommy. Ruth heard her heart shatter inside as she muttered, “Honey … I can’t keep you safe anymore here. The only way I can keep you safe is in Heaven.”

Nolan’s reply had her holding her heart in her hands . “Sooooo I’ll just go to Heaven and play until you get there! You’ll come, right?,” he replied, with a completely unflinching look by the news of his impending death.

According to Women Working, Ruth and Nolan would spend the remaining days together in hospital, laughing and rejoicing in sweet little moments that will soon only remain memories.

“I ran and jumped into bed with him and put my hand on the right side of his face. Then a miracle that I will never forget happened. My angel took a breath, opened his eyes, smiled at me and said ‘I Love You, Mommy.’

Those were the last words of the strong little boy who fought his battle with grace. A little angel with a big heart. He will always be remembered not only by his parents, but also those who witnessed his journey.

Her son makes fun of his schoolmates who shop at thrift...