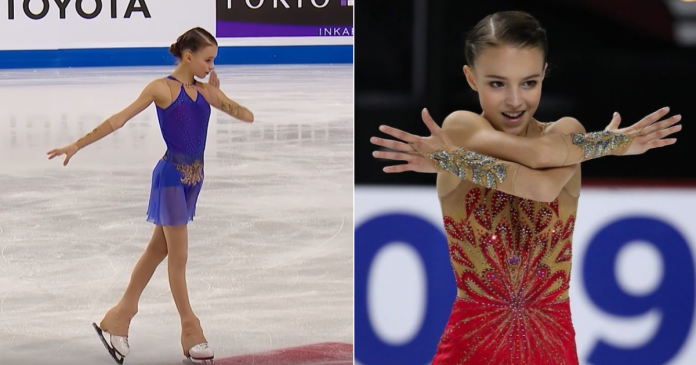 During the International Skating Union Grand Prix which took place in Las Vegas, Shcherbakova impressed the judges and the audience with clean execution of a quad Lutz, triple toe combination followed by a clean solo quad Lutz

The amazing figure skater also included a triple Lutz, a triple loop and a triple flip in a row, twice!

Anna #Shcherbakova is the first woman in history to have completed a quadruple jump in the senior Grand Prix.
The fifteen year old russian has completed two quadruple lutz during #SkateAmerica.
She also set the new free skate record in a stage of the Grand Prix with 160.16 points pic.twitter.com/8pWLMN0AcE

In other words, she managed to do nearly all the difficult jumps in competitive figure skating!

Apart from the jaw-dropping skating skills, Shcherbakova also included a gimmick which involved her having a quick change of costume in the middle of her performance

From a lovely blue costume which she wore in the first half of her performance, Shcherbakova suddenly changed into a fiery red costume after a successful spin, drawing massive cheers from the unsuspecting crowd!

She won the competition with an overall score of 227.76 points

According to her, she was feeling excited for her senior Grand Prix debut albeit feeling a bit nervous.

“I was really excited to skate my first time at senior Grand Prix. I was little bit nervous, too, but it was OK and my coaches helped me to do my best,” Shcherbakova said in English after her performance.

“We work on this jump a lot and we jump it every day, every training. I’m so happy I can show that I can do quad jumps. I’m really happy today that I did two quads.”

Shcherbakova hopes to execute the most challenging jump in competitive figure skating, a triple axel, in her next repertoire

“I’m working on a triple axel,” she said in an exclusive interview with the Olympic Channel. “No, I haven’t landed a clean triple axel in practice yet. We’re working on it off ice, on ice, with harness.”