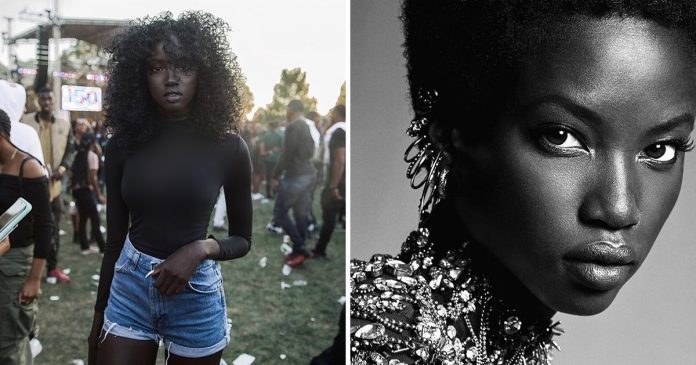 Ever since Anok Yai was a little girl, she always received compliments that she was stunning enough to be a model. However, all of the models Anok saw when she was growing up had a fair and light complexion and she was not one of them.

When she was younger, Anok Yai used to watch “America’s Next Top Model” with her sister

Shot out to @luigiandiango for letting me and @altonmason find our power. All my love ? Get into it

The girls often envisioned themselves as one of the models competing in the reality show and walking on runaways.

Furthermore, the modeling industry is already crowded with aspiring models wishing to become the next Gisele Bündchen.

Hence, despite getting praises for her exotic looks, Anok decided not to become a model

“My fear was being able to stand out because there’s so many girls modeling and the industry is always changing,” she told The Washington Post.

Anok then enrolled at Plymouth State University where she studies biochemistry in preparation for a medical degree.

However, Anok never thought her life would take a different turn when she accompanied her friend to Howard University’s homecoming celebration

Fendi Campaign with Karl ? All my love to the Fendi fam

Anok quickly gained attention from the public when a photo of her taken by photographer Steve Hall went viral.

“I didn’t even think that anyone would look at me,” she said. “I was looking at the girls and they had nice outfits put together.”

According to Steve who is also Howard graduate, he saw Howard’s homecoming as the perfect opportunity for him to take shots that represent his passion — black fashion, beauty and culture.

“Mysterious. Just a tall, dark-skinned and insanely beautiful person. I told her ‘I don’t know what you’ve been doing, but you should definitely be photographed and you should be modeling.’ ” he recalled when he saw Anok at the homecoming.

He later uploaded Anok’s photo on Instagram and it did not take long before his post went viral.

The photo of Anok at Howard’s homecoming has garnered over 91,000 likes and she still receives a couple of thousands of new likes every day

Big thank you to @thesunk for capturing this moment. Amazing photographer. Couldn’t be happier

“When it got to a couple thousand and it just kept going higher and higher, I was surprised. And I was happy. I always wanted it to happen, but it was something I never expected,” she said.

W MAGAZINE x THE CLASH shot by my favs @mertalas and @macpiggott ?

“I got an email from a modeling agency,” she said. “They said they were interested in having me and they had me call them. And they just set up tons of interviews and it just went on from there.”

The best offers she has gotten so far were the ones who were willing to fly her to their offices just like what Anok used to watch on “America’s Next Top Model”.

Despite being grateful for the golden opportunity, she could not help but feeling overwhelmed with the sudden hectic modeling life as a 19-year-old

“And I was nervous because I had just gone from being a random girl living in New Hampshire to an Instagram-famous model. I wasn’t sure if I could handle all the expectations.”

According to Anok, her mother still wants her to finish school but does not want her to miss her shot at modeling. They agreed on taking online classes if her schedule did not permit her to attend class.

She admitted that she once felt extremely insecure about her skin color but now that she is in a better position, she wanted to use modeling as a platform to motivate girls.

“Now, I can speak my mind on certain topics and have people that will definitely listen. Now, I can use my mind and tell people about colorism and teach girls about self-confidence.”

Train staff kneeling down for an hour to comfort crying passenger...