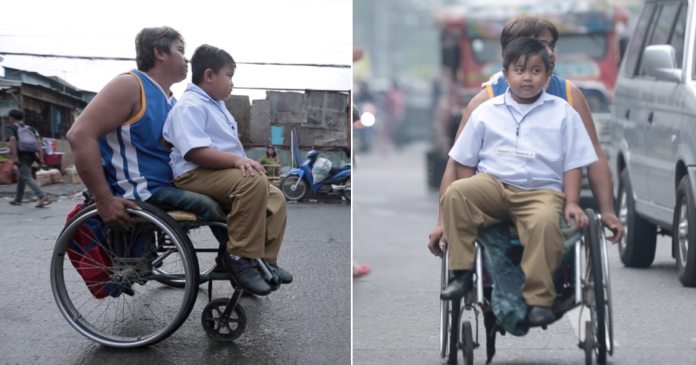 One father from The Philippines makes sure to send his son to school every morning even when he has to manually roll his wheelchair all the way to the school while his son sits on his lap.

Tatay Alejandro has recently been hailed “Father of The Year” after his story of sending his son to school using his wheelchair went viral on the Internet.

Alejandro who is disabled has his reason for doing so: one is to save expenses on bus fares and second, to make sure that his son gets to school safely.

According to the official page of the local television show, Front Row, as translated by Elite Readers, Alejandro became disabled when he was struck by polio when he was only 5 years old

However, he felt grateful as he still managed to have a family of his own years later.

In spite of his disability, Alejandro wants to carry out his responsibilities as a father to his son and one of them is to ensure that his son gets to school safely

Even when he has to cross the busy roads in the morning by manually rolling his wheelchair while his son sits on his lap, Alejandro knows it is the best he could do for his son.

Nevertheless, it is not easy for the father to do so as his son, Junior, who is now 7 years old has grown so big to sit in his lap. Junior is in Grade 2 and goes to Pasig Elementary School where his father drops him off every day.

Ever since their plight was shared on Facebook, many netizens expressed their admiration towards Alejandro for giving his best to raise his son

Many other netizens were also concerned about the duo’s safety as they have to cross busy roads as motorists rush to work every morning.

Nonetheless, hopefully, this moment will teach Junior about his father’s sacrifices and willingness to raise him. Who knows that Junior would be the one who pushes the wheelchair for his father a few years later.