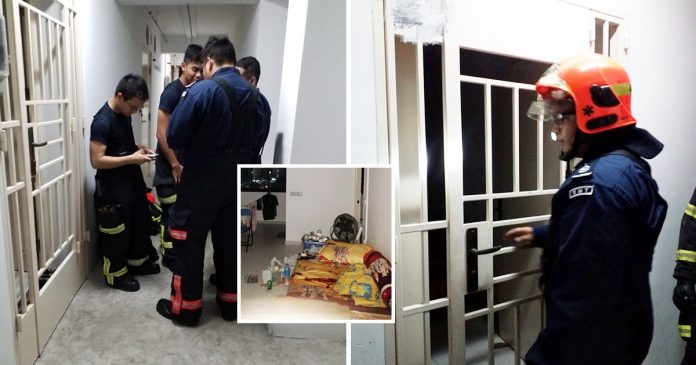 Mummy Yummy is a Singapore-based food stall that sells vegan food to the public, they also focus on distributing free cooked vegan food to the needy in whole Singapore on weekends, right to their doorsteps with the help of volunteers.

Mummy Yummy recently shared an viral post on Facebook about a touching story of their elderly beneficiaries, Grandpa Raja.

The vegan meals they left for Grandpa Raja remained uncollected for three consecutive days, the food deliveryman knew that something bad might have happened to Grandpa Raja

“When the meals were left hanging at his door for 3 consecutive days, we immediately went down to his flat and called the police for assistance because we know something is wrong,” they wrote.

“Grandpa Raja as we called him is living alone in his flat and doesn’t mingle around with his neighbours most of the time. He seldom leaves his flat and everyday he will be waiting by his house gate sitting on the floor waiting for our food to reach him,” they wrote.

According to the post, 85-year-old Grandpa Raja does not even close his door at night for fear that no one would know if he suddenly dies in his sleep.

“When the police officers arrived, they started to do screenings and interviewed us, getting some detailed information and talked to the neighbors.”

“After confirming it might be a missing person or house accident, civil defense personnel was activated to break into the flat.”

Luckily, Grandpa Raja was not found injured inside his home as they thought.

However, he was nowhere to be found when they searched throughout his flat

Luckily, Grandpa Raja called them six hours later to tell them that the police had found him and sent him home. He also told them it was his first time to ride a police car.

“We asked grandpa what actually happened to him and he said he got no money to take the bus home and he couldn’t walk back home. During the few days, his mobile was switched off and uncontactable because of flat battery. He is also scared of asking money from strangers thinking that he might get caught and sent to jail for it.”

In their post, Mummy Yummy praised the police for being able to locate Grandpa Raja in such a short amount of time

“It might just be one old folk gone missing but it will definitely take more than one policeman to find him. Not to mention giving him a ride and sending him safely to his home,” they wrote.

Following the incident with Grandpa Raja, they believe that their initiative to send the meals directly to the beneficiaries is the right decision.

“Incidents like this make our daily interactions with the beneficiaries worth all the efforts. It might not happen daily but once in a while, someone will go missing for different reasons.”

“It’s not just about a packet of food anymore for us, it’s the constant follow-ups and human touch given to them. Prevention is always better than cure and Mummy Yummy’s idea of disaster prevention on our beneficiaries is through this packet of food.“

They further wrote that the initiative allows them to monitor the beneficiaries who are mostly the elderly who live alone and the needy and to respond immediately if something happens to them.

“With this initiative, we can better monitor what our beneficiaries is going through daily and when incidents do happen, we are able to response quickly and efficiently.”

“End of the day, grandpa is back safely and continues to wait for our food at his house gate but this time with a broad smile! Mission accomplished.”

It may be just a small precautionary step to ensure that all of the beneficiaries to collect their free meals at the end of the day but who knows that it has helped save someone’s life.

Mummy Yummy‘s post certainly shows us just how important it is to get to know our neighbours and care for their well-being. Especially if they are elderly and do not have any family members to look after them just like Grandpa Raja. Kudos!