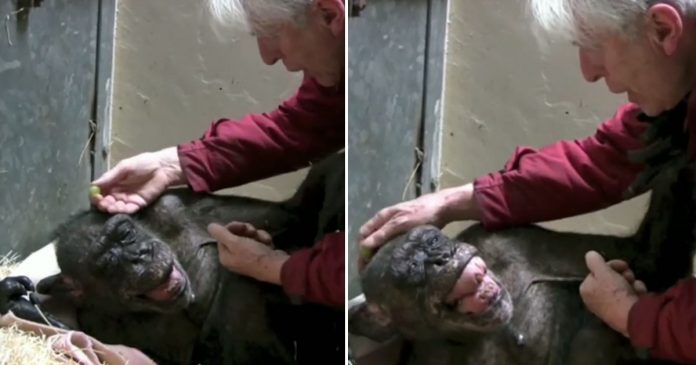 As humans, we are bound to have a variety of emotions that we’re able to feel and express. Be it anger, love, grief or joy, we acknowledge it among ourselves and are able to reciprocate towards it. Though, by the day, we’re coming to realization that it’s not just us humans who are capable of emotions.

Animals too, are able to identify and express certain emotions, especially the ones they share with humans they have close connections with. Not only that, they are also able to display their emotions and pay it forward when the time comes.

In a recent video that was circulated on Instagram, a female chimpanzee reaching the end of her life was shown to be very weak and helpless. Her name was Mama and she was 59 years old. Mama was the oldest chimp in her colony.

It can be seen in the 3 minute-long video how she lay there on her back, dealing with pain and void of emotions. She didn’t even have the appetite or energy to eat. Maybe she knew her time on earth has come to an end.

She has this hollow look in her eyes that will move anyone who watched her to tears.

She was ready to accept her fate. Just about then, something incredible happened. She caught the sight of something familiar, or rather someone familiar.

Apparently, one of her old friends had decided to give her a visit upon hearing the news about her condition.

It was Professor Jan van Hooff, a man Mama could not possibly forget. He was the one who took care of her and raised her, in 1972.

When he first approached Mama, she remained motionless. Perhaps, she wasn’t able to identify him with his silver strands of hair and wrinkled face.

Though soon enough, the memories came back to her. As Professor Van was caressing her weak body, Mama gathered all the energy she had in her and tilted her head up to face him. Then, it happened.

She smiled at him. The sweetest, most loving smile anyone could give. As if that is not overwhelming enough, the old chimp proceeded to shake hands with her old friend while looking right into his eyes.

His presence made her forget she was dying and brought life into her. She even pulled him close to stroke his hair and chin, maybe checking if it was really the man whom once took care of her when she was little.

Mama, who was weak is suddenly seen so cheerful in the video. She was beaming with energy so much that she even accepted food when fed by Professor Jan. That made it all the more special.

They went on to hug and caress one another like two long lost best friends being reunited after years. A couple minutes passes, and then Mama goes back to her usual state, emotionless and deprived of energy. She lays down while her old friend rubs gently on her back.

These were the few final moments of Mama’s life. Maybe she was holding on to her life to experience this one last meet-up with her dear friend. A beautiful, touching moment of love and care between two unlikely parties.

Now Mama can rest in peace. She got to smile one last time, thanks to her old friend.

Woman celebrates 107th birthday, reveals the secret to longevity is to...