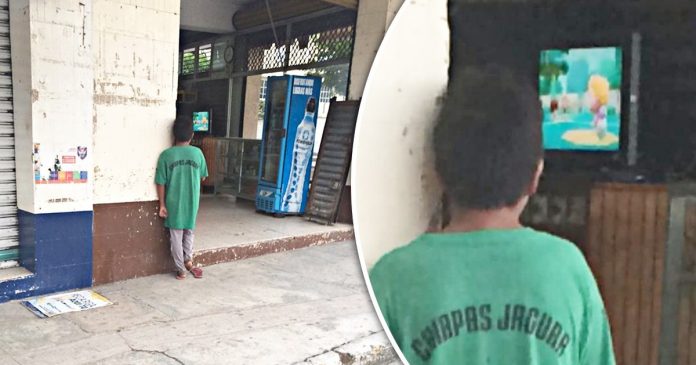 Not everyone was born with everything handed to and prepared for them. Some people like this Mexican boy could only admire things they do not have from afar.

In several heartbreaking photos shared by Facebook user Angel Fonseca, a boy can be seen hiding behind a wall while trying to get a glance at the television showing a cartoon show.

The boy who can be seen wearing a worn-out green t-shirt and a pair of shabby slippers appears to be engrossed in the cartoon show that he does not notice the Facebook user was looking at him.

In the now-viral post, Angel Fonseca wrote, “Not everyone was born with the same opportunities. Count your blessings.”

While having a television at home is common for most people across the world, there are still many who live an underprivileged life and cannot afford to have a television.

There are still many people who have to live without electricity in today’s world. According to the International Energy Agency, about 1.1 billion people do not have access to electricity, let alone a television at home.

The photos which were taken in the poor neighbourhood area in Las Choapas, Mexico, have touched thousands of hearts on the internet and attracted over 1.3 thousand of comments.

One netizen who revealed that he once lived a poor childhood like the boy shared a comment.

“I want to tell you that the boy appreciates more about life than any other kids could. It is a life lesson and a way of God teaching us to not forget our roots and move forward while still being humble.”

Another netizen commented, “These photos bring back the memories of my childhood. My life is now a lot better and I am grateful for what I have done to achieve a better life. Thank you for the photos.”

Meanwhile, there are some netizens who shared a similar experience when they were younger, saying that they, too, watched their neighbour’s television from afar

Following the photos going viral, Angel Fonseca urge everyone to help underprivileged children in Las Choapos who are in need of help from both the authorities and generous netizens.

Arkansas’ Little Rock City pays US$9.25 an hour to its homeless...