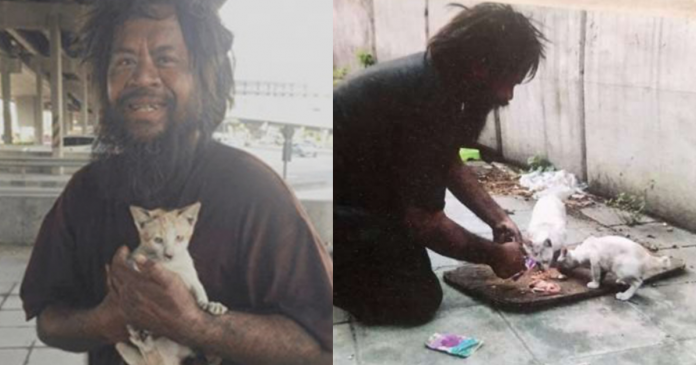 This selfless and generous man from Thailand has been living on the streets for years but that does not stop him from feeding stray cats on a daily basis.

Loong who has been homeless for years earns money by selling limes at the Mo Chit BTS train station in the bustling city of Bangkok.

According to Loong, he did not mind not having food to eat but his heart would break at the sight of hungry stray cats

“I’m fine with skipping meals, but the cat needs to eat,” Loong said in an interview.

In the photo of him that she took, Loong was holding a sign made of cardboard saying, “20 baht per bag, profits will pay for stray cat’s food expenses.”

According to Warunya, she learned that Loong got the limes from a kind-hearted stranger for free. She later proceeded to buy several bags of limes from him.

“We shouldn’t judge someone based on their appearance,” Warunya said.

“Take Loong Dum for example. Though he is homeless and rugged-looking, he has a big heart,” she added.

There have been times when people shun him simply for his unkept appearance. Nevertheless, Loong did not let it get to his heart as long as he gets some coins to buy food for the cats.

At the end of the day when Loong has earned enough money to buy food for stray felines, he would usually get two pouches of wet food or a can of tuna

If there is some extra cash, he would use to buy some food for himself.

When asked why he would make such sacrifices to stray cats, he said that the stray cats he feeds every day are his family and that they rely on him to get food.

Thanks to the generosity of netizens who were moved by his story, Loong received tons of cat food supplies

Some even donated some supplies for his personal use while some would buy limes from him when they saw him at the train station.

The generous donations did not stop there.

Some kind-hearted strangers even got him a fresh haircut, new clothing and other supplies

Loong may still be living on streets and selling limes to earn money to but food for the stray cats, but he knows it makes his heart content