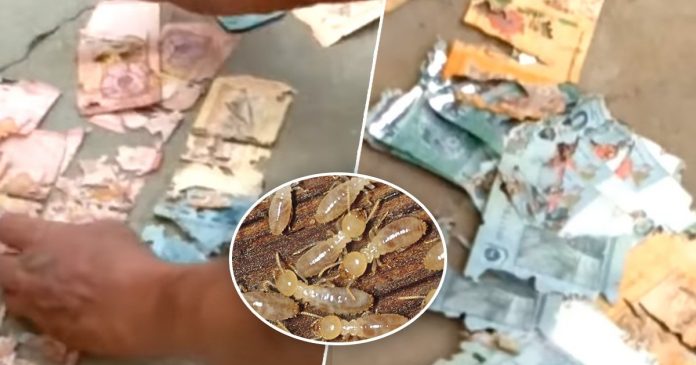 Some people may think keeping their stash of money at home is safer and more convenient than keeping it at the bank. Unfortunately, a man from Malaysia learned the hard way that it is not always best to keep his cash at home when his money was destroyed by termites.

In the 58-second video that has gone viral on Facebook recently, a Malaysian man was heard sobbing as he tried to arrange stacks of destroyed Malaysian Ringgit notes on the floor

The short video clearly shows the notes, ranging from RM1 to RM100 have holes in them with RM50 and RM100 notes are the most damaged

Following the video going viral on social media, many commented that it is only best to keep coins at home to avoid termites destroying the money.

The same incident was also reported to occur in Jakarta, Indonesia in August.

23-year-old Putri Buddin had to let go of millions of rupiah in cash after the notes were severely damaged by termites after she kept the money inside a cabinet, as reported by the Jakarta Post.

On August 17, she shared a photo of damaged Indonesian Rupiah notes on Twitter and it quickly gained attention from the netizens

According to Putri, she kept the cash inside the cabinet for her late grandmother who has recently passed away.

“So I gave my grandmother about Rp 3 million in cash. She said that she did not want to use it, so I put it inside the cabinet. I told her if she needed money she could just take some from there,” Putri said.

However, her grandmother decided not to use the money she gave and kept putting more money until the total amounted to Rp 10 million (US$ 706). Meanwhile, Putri had already forgotten about keeping the cash inside the cabinet.

After her grandmother passed away, she remembered about the cash and found two plastic bags of bills

“There were two bundles of bills; one bundle was inside a paper bag and the other was inside a plastic bag. I threw away the paper bag because it had become a termite nest,” Putri said.

The remaining bills inside the plastic bag contained about Rp 5.4 million. However, only Rp 1.05 million of the damaged notes were eligible to be replaced with new ones.