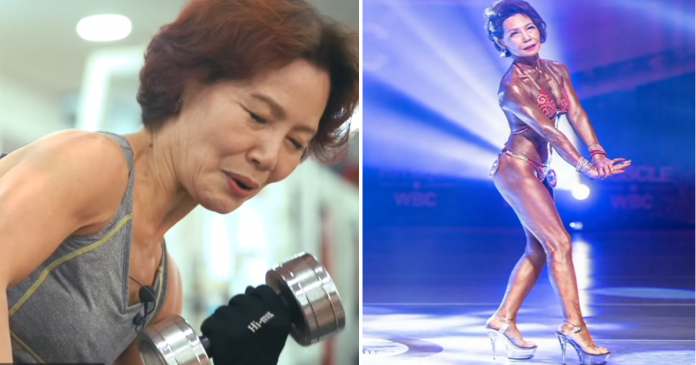 Most bodybuilders hit their peak in their 30s and retire when they are in their 40s. However, this 75-year-old Korean grandmother proves that age is just a number when she placed second in a recent bodybuilding contest!

There was no category for the elderly in the bodybuilding contest.

Nonetheless, it certainly did not matter as Lim herself does not look like any typical grandmothers

Born in 1944, Lim said that she has always lived a healthy and active lifestyle by doing aerobics

However, she later had to find another workout alternative when she was diagnosed with stenosis.

“I like exercising so I did aerobics for 35 years but I got stenosis. I wasn’t able to walk with my right leg and as a part of treatment, I began going to the gym in May of last year,” she said, as reported by Koreaboo.

Fortunately, going to the gym not only proves a better alternative for her to exercise but also helps her to sculpt her body

That was when she began to enter bodybuilding contests. So far, she has won several awards.

Lim encouraged everyone to chase their dreams even, no matter how old they are.

“Everyone has dreams. But if you give up on those dreams because of old age, life becomes too meaningless,” she said.

She added that succeeding in something requires confidence and some desperation.

“If you challenge yourself to your dreams even after aging, I believe you will be able to have a great life in your remaining time.”