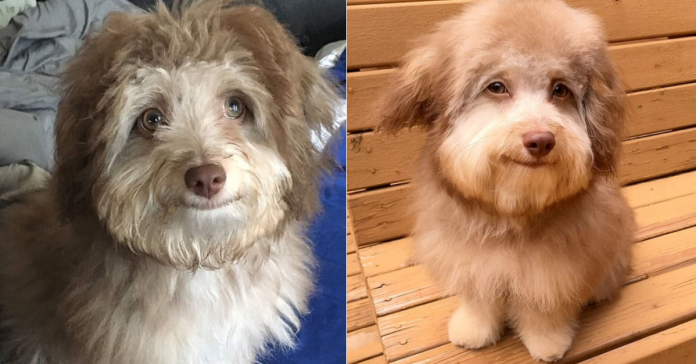 This adorable dog may look like his owner has used the face swap app on his photos but believe or not, he really is blessed with a human-like smile.

Meet the dog who recently became the latest sensation on the Internet, Nori, whose smile always leaves a lasting impression to anyone who has seen his photos

Thanks to his unusually large, almond-shaped eyes, Nori’s smile looks very much like a human!

According to Nori’s owners, couple Kevin Hurless and Tiffany Ngo, they, too, were struck by Nori’s charming smile when they first bought him when he was still a puppy

HAPPY BIRTHDAY @feedher!!!!!!!!!! Nori and Boba say happy birthday too but demand presents from us for your birthday? They’re crazy. We’re lucky to have you in our lives!

“When he was a puppy, we couldn’t go more than a block without someone stopping us to ask questions about him,” Kevin said.

“It has become less frequent as he’s gotten older, but we still often hear about how human his face and eyes look,” he added.

A mix breed of Toy Australian Shepard and Toy Poodle, Nori also has his own Instagram and Twitter accounts where Tiffany regularly share his photogenic smiles with the followers

“That’s where we get all the comments about his human features, with some people saying he looks like a giant person, or they’re marvelling at his eyes,” Tiffany said.

Thanks to his unusual features, Nori’s photo even appeared on the British television program, BBC Breakfast

This has tickled me this morning @BBCBreakfast
?????? pic.twitter.com/me3Cds3KQ4

Despite Nori’s human-like facial features, he is still very much like other dogs who enjoy playing with squeaky toys and meeting friends and strangers on the street

Look at the surprise guest on the left, half of our dog park friend!

“He loves all people and dogs that he meets, and just wants to be friends with everyone,” Tiffany said.

#TBT: We had such a blast @logecamps in @visitbend! We had a hammock AND a sauna in the room. We partied hard, as you can see. Should we go back soon?

“They get along great and play together all the time, though Nori sometimes has too much energy for Boba and Boba gets annoyed.”

Nori’s human-like smile looks even more pronounced when he stands side by side with Boba!

A Dog is Bitten by a Rattlesnake while Saving His Owner